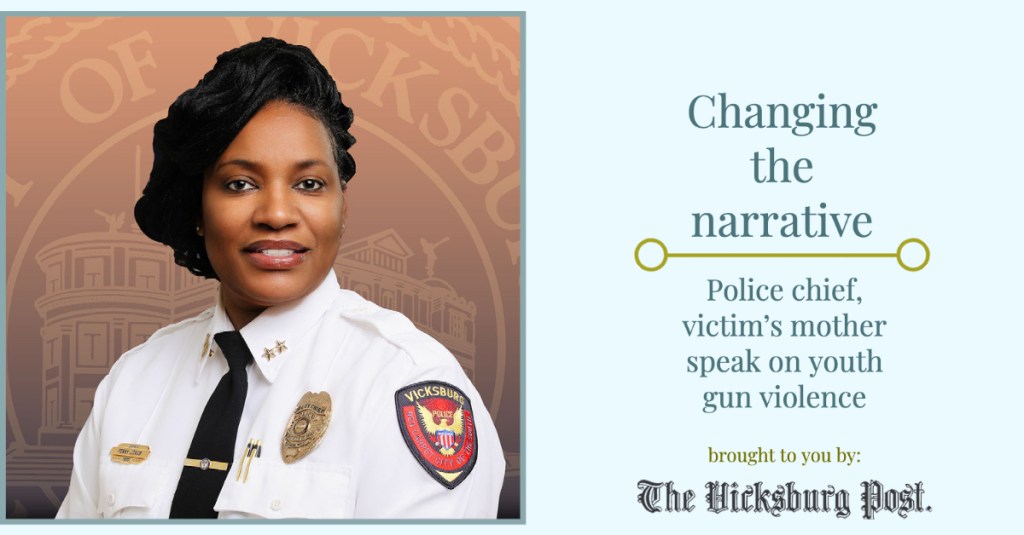 This is the fourth and final story in a series from The Vicksburg Post investigating youth gun crimes in Vicksburg and Warren County. To read the third story in the series, click here.

Vicksburg mother Toni Graves’ world turned upside down on Oct. 19, 2020, when her 20-year-old son Karl Michael Singleton was gunned down in his home on Enchanted Drive.

However, the grieving mother got one step closer to justice for her child this week. The Vicksburg Police Department and Chief Penny Jones announced Friday that arrest warrants were issued for at least one suspect in connection with Singleton’s murder.

Speaking in a press conference, a tearful Graves was candid about the personal toll gun violence had on her family — on her son, whom she and Jones both said was still a child.

“I just want y’all to know this hurts me so bad. I don’t know why. I’ll never know why, but I know he’s not here with me anymore,” Graves said. “And I’ll tell you one thing: God gives you life, but it’s not your job to take it.

“This is ridiculous. It’s senseless. Just put the guns down. That’s all I ask. I told my son all the time — I had many sleepless nights, but I’m not going to give up on him. I refuse to because I’m his mother,” she said.

This is the latest in a string of investigations, arrests and weapon confiscations as part of Operation Blitz, a crime-fighting initiative announced last month by Mayor George Flaggs Jr.

Jones said she takes Operation Blitz seriously, and that thus far, her department has been successful in getting guns out of the hands of those who intend to do harm — including at least 10 juveniles.

“One of the main targets was guns. We’ve been having such a problem with break-ins, and getting into vehicles, and I’m so sad that people don’t realize how serious it is when they don’t lock their car,” Jones said. “That’s one way these kids are able to get guns, is out of cars.”

The reason children and teenagers carry guns, she said, is simple: It’s a status symbol. But the problem happens when they steal firearms or carry them with criminal intent.

By increasing the police department’s presence on the streets, Jones said, they are able to send a message to adolescents and their parents.

“One of the things I wanted to do with Operation Blitz is, I wanted us to get out there for the young folks to say, ‘Uh-oh, they’re out tonight,’ or ‘Something’s happening y’all, go home,'” she said. “As far as the parents are concerned, we can’t be your child’s mom and daddy. In order for us to make this work, the parents are going to have to work with us.”

While Singleton’s death is not confirmed to be gang-related, Jones did say a number of youth gun arrests are. She also confirmed the presence of “at least 10” gangs in Vicksburg but admitted that they were not as serious as in other, larger cities.

“Oh there are a lot of gangs in Vicksburg. I don’t know why (anyone) would say that there aren’t,” Jones said. “I know some of the gang members here — they are influenced by the older guys who are really wanting to be a part of gangs like the Vice Lords, the Bloods, the 4 Corner Hustlers.”

Often, when the police department catches a juvenile breaking the law, Jones said parents are angry with officers for arresting their child.

The mentality must shift, she said, explaining that it takes strong adult figures to help guide impressionable children on the right path and help them make better decisions.

“I’m not going to blame it on the parents all the time, but sometimes you can blame the parents. Some of the arrests we’ve made during Operation Blitz, we have had some parents who were very angry, because we caught their child with a gun,” she said. “They won’t accept responsibility for what their child has done. But when they go out there and they do something they’re not supposed to be doing, or when they’re seeking help for their child, then they need us.

“But if we can work together as a team, parents and police, we can change the narrative as to what’s going on.”

Those figures aren’t always present in the home, so Jones said she is working with the Warren County Youth Court to start a mentorship program specifically targeting teenage boys at risk of delinquency.

“Children are the future”

For Jones, the idea of halting youth gun crime in Vicksburg directly correlates with her retirement.

“When I think about juveniles and crimes and guns, I think about retirement. I think about Whitney Houston, when she said, ‘I believe that children are the future. Teach them well and let them lead the way. Show them all the beauty they possess inside. Give them a sense of pride to make it easier.’

“At some point, I’m not going to be in this position,” she said. “And the person who’s going to be sitting in this chair may be one of those kids that I dealt with in the past.”

As anti-police sentiments continue to grow across the nation, Jones said Phase Two of Operation Blitz is meant to combat that mentality.

From neighborhood block parties with officers, to hosting performance opportunities for local children, VPD will soon be further integrating itself into the community.

“We’re going to have guys walking in the neighborhoods, knocking on doors,” Jones said. “‘Hey, I’m Officer So-and-so. We’re walking through the neighborhood and wanted to know if you have any problems or if there’s anything we can do for you all.'”

She also expressed interest in resuming coordination of neighborhood watch programs, and the Citizen On Patrol program, which gives participants an opportunity to walk in the footsteps of a police officer.

The personal toll of gun violence

Vicksburg has recorded two homicides this year, both with juveniles who stand accused of murder. While Jones said her officers are able to push aside their personal feelings while on the job, she didn’t deny the emotional toll working the cases had on her and other officers.

“We’re human. If you cut me, I’m going to bleed,” she said. “When things like that happen, we have to get into work mode in order to make the investigation work. We were all in work mode when the incident happened, but we’re talking side-by-side saying, ‘I’m hurt. I’m hurt for the parents. I’m hurt for the child.'”

Like the death of Singleton, Jones said, the two 2021 homicides were preventable.

In addition to bringing justice to the families of victims, Friday’s press conference served another purpose: a stark warning.

“For some of these parents who are having problems, I hope that this is an eye-opener for a lot of parents as well as children,” Jones said. “We mean business. We want to get these guns off the street and get these children on the right track. He was 20 years old. Still a child.”