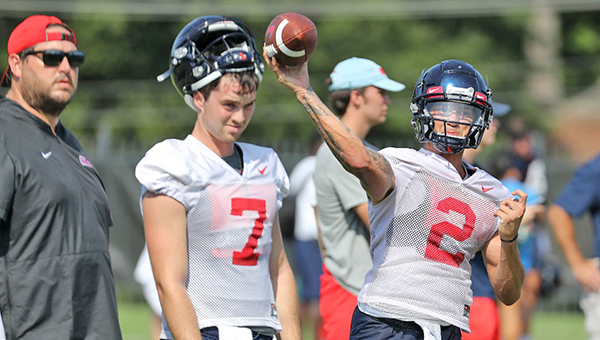 OXFORD — Through the first two days of preseason camp, the Ole Miss football team has experienced a taste of normalcy that was largely missing from a year ago.

Despite a few precautionary measures in place inside campus facilities, the Rebels took a step in the right direction after head coach Lane Kiffin revealed that this players, coaching staff and team personnel are 100 percent vaccinated for COVID-19. Regardless, it still comes down to controlling what this team can control.

“We’ve had two practices, good to get players in helmets,” Kiffin said Monday, during Ole Miss’ annual media day. “It’s good to get out there. We’re proud of our staff for getting the vaccine. It shows the commitment to each other. It took a while to get to that point. It should be a message to the rest of the state. Very competitive practices, a lot of guys rotating. We’re finding things out early in camp … As it got closer, we saw the reasons why everyone was doing it, for their team. I think it’s irresponsible not to.”

Kiffin has seen buy-in from his players outside of the vaccinations, including numerous players shifting to different slots on the field as preseason camp begins.

Among the first questions from the press during Monday’s media day: John Rhys Plumlee’s transition to receiver. On Monday, Plumlee wore a blue jersey like his fellow skill position players and performed said receiving duties full-time.

“He’s still a quarterback mentally,” said quarterback Matt Corral, a preseason first-team All-Southeastern Conference selection. “He knows what I’m looking for. He thinks like one. Now he has footwork and getting more familiar with routes and attacking angles.”

In his only game action at receiver last season, Plumlee caught five passes for 73 yards en route to helping his team beat Indiana 26-20 in the 2021 Outback Bowl. In his place behind center, sophomore Kinkead Dent and true freshman Luke Altmyer are in competition for the No. 2 spot.

With a load of riches in the backfield, Jerrion Ealy is anticipating the possibility of seeing action at slot receiver. Ealy led the Rebels with 745 rushing yards and nine touchdowns last season. He caught 15 passes for 155 yards and one TD out of the backfield.

“First couple days have been getting used to it and getting back in football shape,” Ealy said. “I haven’t really gotten reps, but I’ve done one-on-ones. We’re getting there … Us being able to move out, that gives our offense a bit more fire so we don’t have to change sets and play faster.”

The arrival of Utah transfer Orlando Umana is expected to put puzzle pieces where they best fit. Having extensive experience at center allows Ben Brown to return to his natural position at offensive guard.

“He’s had two good days,” Kiffin said of Umama. “He’s played a lot. There’s a process in playing center in our system. We play fast, so he has to develop that way. If he can do that, it allows us to play people in the right spots.”

Brown, a Vicksburg native and former St. Aloysius star, said he was OK with the move. He started every game at right guard in 2018 and 2019.

“It comes more naturally to me, having more experience,” Brown said. “I love it, doing whatever the team needs. Whatever is the best option now.”

Defensively, the offseason was spent improving nearly every aspect of their game and upping their statistical ranks from a year ago. The arrival of Otis Reese for the final three games of last season proved to be a shot in the arm, and a sign of what’s to come in 2021.

“It was a blessing,” Reese said. “I was grateful for the game. It built my confidence. Just to be out there and build chemistry, I saw how people act. All across the board, I’m never satisfied. I need to work on everything. Everything needs to be on a level playing field.”

Through two fall practices and the offseason, the answer as to what is different this time around was simple when Reese and veteran defender Jaylon Jones looked back on it.

“It feels different,” Reese said. “Vibes and bonding. We’re ready to go to work and we’re clicking. Everything is coming together.”

Corral also shared his vote of confidence, having to face them in practice and knowing their hunger going into 2021.

“I’m proud of them,” Corral said. “It’s hard not to pay attention to what people are saying. You are what you put on film, but the strides made have made them a totally new unit and they are aggressive.”