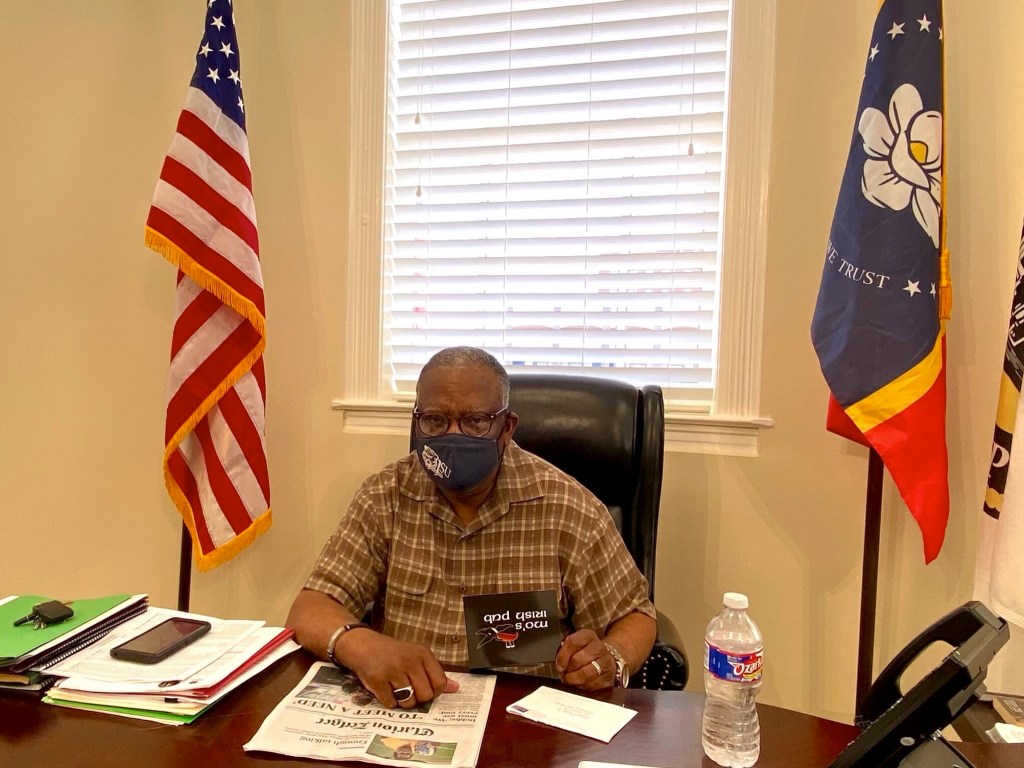 Mayor George Flaggs Jr. sits behind his desk, marking his return to work one week after announcing he tested positive for COVID-19. (Photo submitted)

Mayor George Flaggs Jr. addressed the public Tuesday to discuss his experience with COVID-19 and explain his decision to return to work Monday after what appeared to be a five day quarantine.

The mayor announced on Aug. 2 he tested positive for COVID-19. A press release providing the information indicated he would return to work Monday. He said Tuesday, however, he had COVID-19 symptoms almost two weeks before test results indicated he had the virus.

Flaggs discussed his situation at Tuesday’s meeting of the Board of Mayor and Aldermen and disputed claims he did not follow the quarantine regulations from the Centers for Disease Control.

The Centers for Disease Control and Prevention (CDC) recommends an end to quarantine between seven to 10 days after a positive test if the person in question has a negative COVID test and no fever for two days. Flaggs said he followed the guidelines.

After the meeting, Flaggs said people didn’t understand when he began showing symptoms of the disease, which occurred approximately July 21 when he ran a fever and became ill at a state conference on the Mississippi Gulf Coast. He said he did not know when or where he contracted the virus.

“When you look at the timeline when I developed the symptoms, I was 14 days in quarantine altogether; it’s absolutely 18 days,” he said. “I only went to the doctor in the aftermath of it because I had low blood pressure. Not because I thought I had the virus.

“I never thought I had the virus,” Flaggs said. “I thought there were some other things going on with me because I have underlying illnesses at my age.”

When his blood pressure dropped, he said, he went to his doctor on July 29 to correct the problem. “When I walked in the doctor’s office, I was completely healed,” he said.

It was while he was being examined for the blood pressure problem, Flaggs said, that his doctor suggested testing for COVID-19. He learned he tested positive Aug. 2.

Before he went to the doctor, Flaggs said, he worked in his office. He also attended the Mississippi Municipal League convention in Biloxi the week of July 26.

He said all of his symptoms were gone by the time he went to the doctor on July 29.

“If I had not had low blood pressure I never would have known,” he said.

If he had been diagnosed with COVID, he said, “The CDC said if you are an essential worker and you can go to the workplace and can stay more than six feet from someone in your isolation you don’t have to quarantine; you can still go to work.

“I just couldn’t be exposed to anybody in the public,” he said. “Other than not take the vaccine, I don’t think I ever put the public at risk. I put myself at risk, and to that extent, I apologize.”

According to the CDC, people who do not test who think or know they have COVID-19 and had symptoms can return to normal life 10 days after the symptoms first appeared and 24 hours with no fever without the use of fever-reducing medications and other symptoms of COVID-19 are improving.

Tuesday, Flaggs said, “I did not tell it all (about his experience), I just told what needed to be told (about) what happened. I know what happened.”

He said after the meeting the effects of the disease were more severe on him than he expressed in his comments at the opening of the meeting.

“I was trying to express to the citizens that it’s no joke and there’s no reason not to take the vaccine. I wanted to let them know that it impacted me; it was a life-changing experience. It was almost like death.”

Flaggs apologized “to anybody who was hurt by the fact that I did not take the vaccine.”

He said he intended to take the vaccine but held back after reading a newspaper article from Texas about people complaining politicians were getting in the front of the line to get the shots.

“I organized many, many opportunities for folks in this community (to take the vaccine),” he said. “I had every intention to but I kept putting it off and putting it off and I owe nobody an apology; I don’t regret it other than the fact that I’ve always said I lead by example and I didn’t do it to the extent that I probably should have taken it a lot earlier.

“I do highly recommend, based on what I went through that if you can by all means take the vaccine.”

“I felt really good coming back yesterday,” Flaggs said. “I’m fine. I don’t want anyone to have what I had and I thank God for bringing me through it. I didn’t take any medicine for it. I kept the faith and kept strong.”