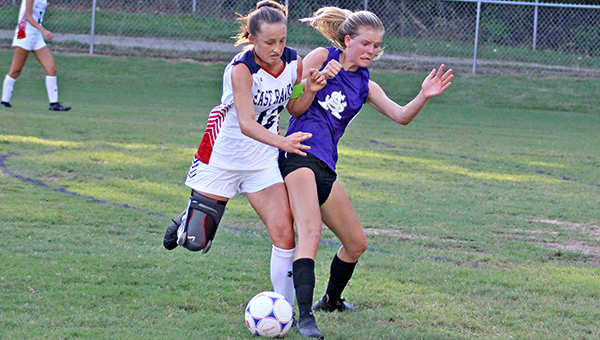 St. Aloysius spent the first half of Tuesday’s game against East Rankin Academy in an almost dormant offensive state. It finished with an offensive flourish. The net result of that equation, fittingly, was neutral.

Bree Butler scored an early goal for St. Al, Abbie Hutson got the equalizer for East Rankin in the second half, and neither team was able to cash in on some late pressure as they played to a 1-1 tie in an early-season girls’ MAIS soccer match at Balzli Field.

“We went back to an old formation, 4-4-2. It’s a defensive formation, so we played defense a lot. We did get opportunities to finish. But it’ll come,” St. Al assistant coach Maurice Gilliam said. “We really like what we’re seeing on the field. I think this is a championship team.”

St. Al (1-0-1) only took one shot in the first half, but made it count. Bree Butler got the ball in space on a counterattack, about 20 yards from the net, and beat East Rankin keeper Kyla Huffman on what amounted to a one-on-one.

Butler’s second goal of the season came in the 10th minute of the game, and gave the Lady Flashes a 1-0 lead.

East Rankin (1-0-2) controlled most of the first half, but St. Al’s backup keeper Madelyn Roesch made two saves while subbing for starter Ella Gray. Gray cramped up while taking a goal kick in the first half, and returned to the game in the second. She also had two saves.

East Rankin outshot St. Al 4-1 in the first half, but had nothing to show for it. Finally, 12 minutes into the second half, Hutson got a couple of steps on her defender, dribbled about 40 yards up the right side, and beat Gray on the breakaway to tie the game.

Both teams had chances to score throughout the second half, especially as time got short and they started to push.

St. Al’s defense, meanwhile, took care of most of the action in front of Gray. East Rankin had several moments of pressure in front of the net, but only managed three shots in the second half — one of which was Hutson’s tying goal.

In all, Gilliam said it was a good early-season test for the Lady Flashes against a quality opponent.

“The momentum fell back in our hands and we showed we could attack when we wanted to,” Gilliam said. “We did tuck in, but when we needed to attack, we were able to. We just didn’t finish. But it’ll come.”