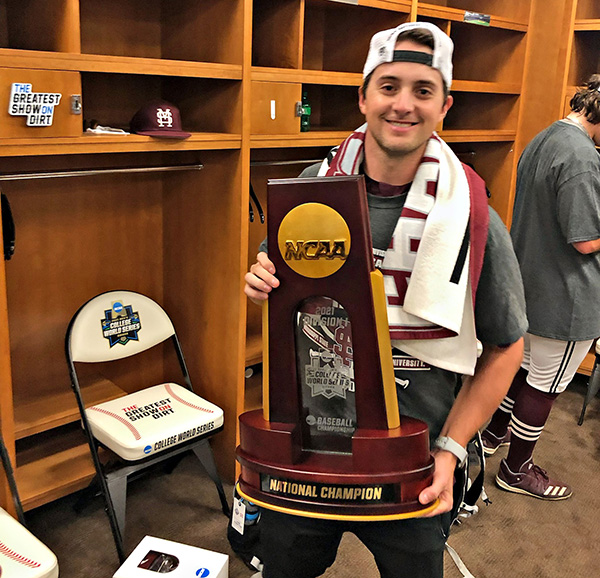 Carlisle Koestler holds the national championship trophy after helping Mississippi State win the 2021 College World Series in July. Koestler, a former Warren Central star, was hired as the director of baseball operations at Samford University. (Submitted to The Vicksburg Post)

Carlisle Koestler’s long college baseball career has finally come to an end, but his coaching career is just beginning.

The former Warren Central and Mississippi State star has been hired as the director of baseball operations at Samford University, the school announced Friday. The job typically covers a variety of administrative duties, such as scheduling games and practices, as well as working with the team at practices.

“Couldn’t be more thankful and excited for the opportunity!” Koestler wrote in a Twitter post announcing the hire.

“These guys all have baseball experience at the highest of levels having played professionally with T.J. and Marlon, and winning a College World Series championship with Carlisle,” Samford head coach Tony David said in a statement. “I am excited for our players, program and Samford University. There is no place like Samford. We are elated to keep this thing moving forward.”

Koestler played seven seasons of college baseball at three different schools — Hinds Community College, Southeastern Louisiana, and finally Mississippi State. The right-handed pitcher received two extra years of eligibility by receiving a medical redshirt at Southeastern Louisiana for the 2019 season, and because of the COVID-19 pandemic in 2020.

In 2021, Koestler was the oldest baseball player in the Southeastern Conference. He was part of Mississippi State’s 2021 national championship team, as a midweek starter and reliever. He had a 3-0 record in 11 appearances, and pitched 19 2/3 innings this season.

In five seasons at Mississippi State and Southeastern Louisiana, Koestler had a 16-8 record in 53 appearances and 36 starts on the mound. He pitched 217 1/3 career innings and had 184 strikeouts. The 2014 Warren Central graduate also played two seasons at Hinds before signing with SLU.

“Carlisle comes to us fresh off of winning a national championship at Mississippi State and he is as highly recommended as you can be,” David said. “He has been around great baseball minds and performed as a player at the highest of levels of our college game. He arrives on campus ready to hit the ground running with the technology aspect of the program that will allow us to take immediate advantage of these additions. It is already clear that our guys will be better players because Carlisle is a member of this staff and will be a rising star.”