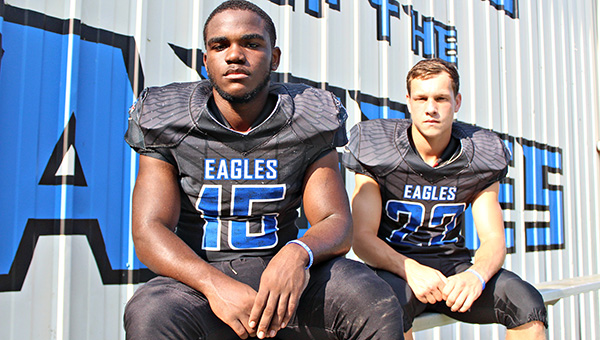 Throughout the spring and summer, Tyler Washington and Brayson Morson have had a heated competition to see which will emerge as Porter’s Chapel Academy’s starting running back.

Both are listed at the top of the depth chart, an experienced senior and his sophomore challenger competing for carries. In the end, the winner will be determined by the hot hand — and whoever remembers that rock smashes scissors.

“When we do team offense we get beside each other and play rock, paper, scissors and whoever wins, that’s who gets to start for the day,” Washington said.

So far, Morson has the upper hand.

“The first time we both go scissors,” Morson chimed in. “The second time I go scissors and Tyler goes paper. It’s always been like that.”

The unusual method of determining a starter began as an offhand joke by head coach Blake Purvis. Washington has been the primary rusher for the past two seasons — he had a team-high 641 yards and eight touchdowns in 2020 — but Morson has a quick, shifty running style that is ideally suited for the Eagles’ new 8-man offense.

Purvis listed both atop the depth chart and told them to sort it out themselves.

“They both asked me, ‘There’s two of us up here in the No. 1 spot. What does that mean?’ I was like, ‘I don’t have a one and a two. I’m good with either of you guys.’ They asked when they go out, who is with first team? I told them to play rock, paper scissors for it. I don’t care. Y’all are equal to me,” Purvis said.

Porter’s Chapel’s transition to 8-man football this season has brought high hopes for the program. After more than a decade without a winning season as one of the smallest 11-man programs in the Mid-South Association of Independent Schools, the Eagles feel they are on a more competitive footing.

A slew of returning starters and offensive playmakers has them confident they can contend for a playoff spot.

Besides Washington and Morson, senior wide receiver Willie Rogers is a threat on the outside, quarterback Jace Riggs is a dual threat running and passing, and sophomore Taylor LaBarre will also get some touches.

“So really you’re looking at five versatile weapons people are going to have to account for, and all five are going to be on the field at the same time some,” Purvis said. “It gives us the ability to rest them, keep them fresh, and maximize what they can do when they are out there.”

Even with the depth at the skill positions, the offense will revolve around the two-headed monster of Washington and Morson.

Washington describes himself as the more physical runner of the two, while Morson is at his best in the open field. Morson rushed for 457 yards and five touchdowns last season, but was also splitting time between the junior high and varsity teams. Because of MAIS rules he only played two quarters in the varsity games.

PCA’s junior high team has played 8-man football for three years, and Morson scored 25 TDs as its quarterback in 2019.

“I like 8-man, because they’ve got a lot more space and you’ve got to tackle. You can’t go up there and barely bump them. You’ve got to wrap up and tackle, and if not they’re gone,” Morson said.

Washington agreed, and said the two styles complement each other well. PCA played two 8-man games last season, against Deer Creek and Claiborne Academy, and the two backs combined for 500 yards and six touchdowns in a pair of victories.

“With me coming downhill and hitting people, and then you’ve got Brayson here as a speed demon, it’s going to get everybody tired running to the outside and then here I come up the middle and they won’t have the energy to stop me,” Washington said. “When you put us both in there and we run 100 percent, they can’t beat us.”

While Washington and Morson are competing for playing time, they are hardly rivals. Washington said he’s trying to help Morson learn the position and prepare to take his place as PCA’s next big star in 2022 and 2023.

“I’m trying to help him a lot, but Brayson is probably just as good as me or more skilled,” Washington said. “He’s faster than everything, so I know he’s got a big future at PCA and I’m just trying to help him to stay confident. I know he can do anything he wants to here.”

Washington added that he gets excited watching Morson run the football and break off big gains — until he realizes what it means.

“It gets me excited until I realize I get less reps running the ball,” Washington said with a laugh. “But if you want to win the state (championship), you’ve got to share the ball.”

The Eagles are hoping their two outstanding backs do carry them that far. Porter’s Chapel reached the state semifinals three times in the 2000s, but has never gotten to a state championship game. Its last playoff win was in 2008. Its last playoff appearance was in 2014.

If both running backs can fulfill their potential and power the offense the way they feel capable of, the Eagles might end both of those droughts this season. The 2021 season opener is Aug. 20 at Kemper Academy.

“They think that because we had a bad record, we don’t have any potential,” Washington said. “But I think 8-man is going to be our thing. We’ve played it and we’re good at it. People are underrating us and we’re going to come out there and hit them in the mouth.”