Some Vicksburg churches masking up again amid COVID surge 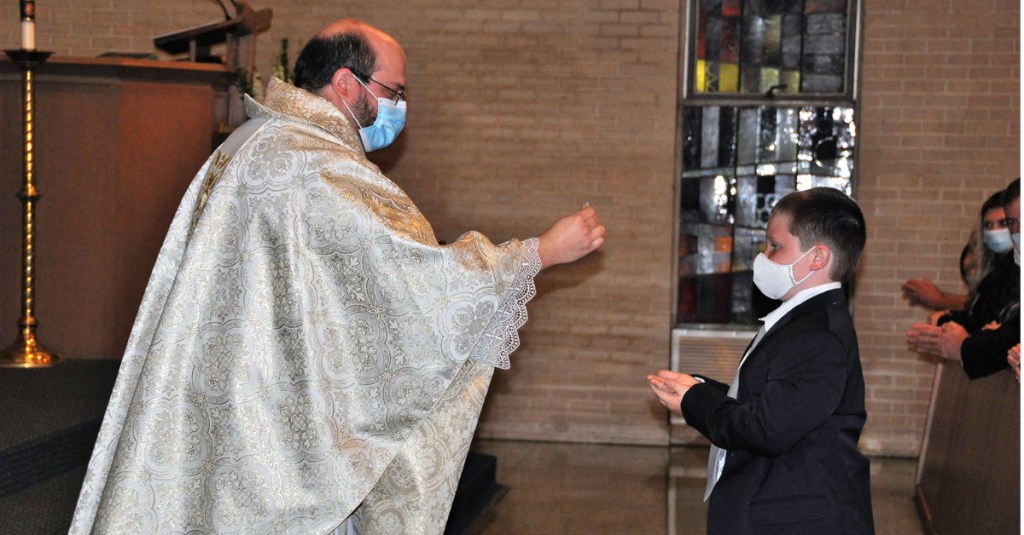 The Rev. Rusty Vincent, pastor at St.Paul's Catholic Church wears a mask as he distributes communion during Mass in the spring. Many local churches are returning to using masks during services. (Submitted)

Several local churches are returning to wearing face masks as the incidence rate of COVID-19 increases and the city goes under a two-week mask mandate.

Mayor George Flaggs Jr. Wednesday issued a citywide emergency mask mandate from Aug. 12 to 26 requiring all residents to wear masks “inside public businesses/buildings, including retail businesses such as grocery stores, building supply stores, convenience stores and other businesses and organizations including, but not limited to, restaurants, salons, barbershops, tattoo parlors, if social distancing cannot be practiced.”

However, some churches returned to the masks ahead of the mayor’s mandate.

As of noon on Friday, the Catholic Diocese of Jackson had not revised its COVID-19 guidelines issued July 22, and the Rev. Rusty Vincent, pastor of St. Paul’s Catholic Church declined to comment. Officials at First Baptist Church also declined to comment, referring questions about masks to pastor Dr. Matt Buckles, who was out of town.

The Episcopal pastors’ decisions follow an Aug. 2 letter from the Episcopal Diocese of Mississippi telling churches to follow Mississippi State Department of Health guidelines and recommended church members get vaccinated and wear masks.

“Along with those recommendations, we support any congregation who may need to take additional precautions to keep their church members safe and healthy,” the letter said. “Clergy and parish leadership will know how to respond to their local context. Thank you for all the ways you continue to adjust.”

“We were already saying (before the letter), ‘Let’s mask up just to be careful,’” said the Rev. Sam Godfrey, rector of Christ Episcopal Church.

The Rev. Andy Andrews, the rector of Church of the Holy Trinity, said church officials had recommended returning to masks, “And now we’re following the city’s mandate. We’ll update weekly; it’s our protocol.”

The Rev. Elisabeth Malphurs, the priest in charge at St. Alban’s in Bovina, said the church has returned to masks and the church continues to offer live-streamed Sunday services online through Facebook and also offer all of its church programs like Sunday school and its Tuesday Bible group online.

“We’re finding that a lot of people feel safer at home and still be able to join us but not in person,” she said.

Each individual church, he said, will make its own decision on what precautions to follow. The task force, he said, will discuss more stringent rules like capacity for services when it meets next week.

“Ours (mask mandate) is open-ended; it will not necessarily end after two weeks,” he said.

Kevin Bradley, the pastor of Crawford Street United Methodist Church, said emails containing a copy of the summary of the city’s orders were sent to members of the congregation with a link to the city’s website.

“We’re going to be complying (with the mandate),” he said. “As of now, we’re going to stick with what the order is. As we’ve been doing since the pandemic set in, we’re going to continue to monitor everything. Not just what the government says, but the Mississippi Annual Conference says and certainly what medical professionals are advising as well.

“So we’ll continue to look at all of that but as of now, we’re certainly going to follow what the emergency order of the mayor says.”