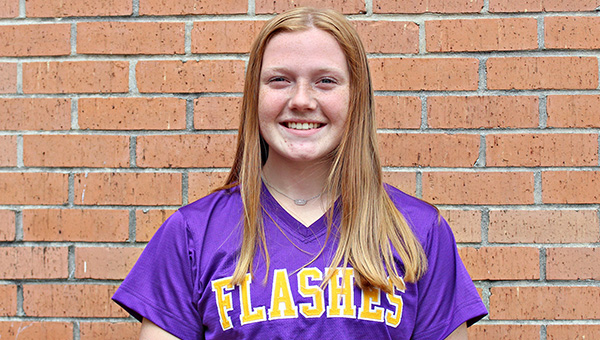 St. Aloysius softball player Maddy McSherry doubled and drove in two runs in an 8-7 loss to Madison-St. Joseph on Monday.

One big hit finally settled a softball slugfest between St. Aloysius and Madison-St. Joseph on Monday.

Megan Davidson delivered a two-run double with two outs in the bottom of the fifth inning, and those stood up as the winning runs as St. Joe beat the Lady Flashes 8-7.

Davidson finished 3-for-3 with three RBIs and two runs scored for the Lady Bruins (4-3). Kaitlyn Jones had two hits and scored three runs, while Iris Steckler was 2-for-3 with two RBIs.

For St. Al, Ali Grace Luke had two hits and scored twice, Maddy McSherry doubled and drove in two runs, and Abigail Mikulski had a triple and three RBIs. Pitcher Kyleigh Cooper had eight strikeouts in six innings, and was 2-for-3 with one run scored at the plate.

Each team scored three runs in the third inning, and two each in the fourth and fifth. Victoria Morehead hit an RBI single in the top of the fifth and Presley Brister scored on a passed ball to put the Lady Flashes ahead 7-6, but Davidson’s double in the bottom of the inning put St. Joe back in front.

Jones, St. Joe’s pitcher, then retired six of the last seven batters she faced to close out the game.

St. Al will be back in action Tuesday at 6:30 p.m. when it heads to Natchez to face another Catholic school rival in Cathedral.