Whitetails Unlimited banquet offers fun, guns for a good cause 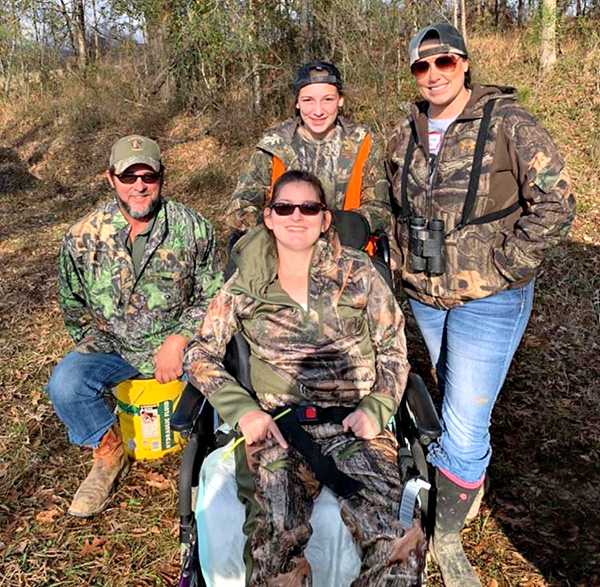 Clockwise from left, Patrick Vinzant, Natalie Cantin, Melissa Reeves and EdenThornton pose for a photo at the 2019 G6:2 Outdoors Hunt at Vinzant’s Dragon Ridge Outfitters Lodge in Warren County. The hunt for disabled children and adults is sponsored by the Warren County Chapter of Whitetails Unlimited, which will hold its annual banquet in September to raise money for G6:2 Outdoors. (Submitted to The Vicksburg Post)

Vicksburg’s outdoors enthusiasts will have a chance to eat a steak dinner, win a gun, and help out the area’s disabled hunters all in one shot.

The Warren County Chapter of Whitetails Unlimited will host its annual banquet on Tuesday, Sept. 7, at the Levee Street Warehouse. The banquet will include dinner and a gun giveaway, with all proceeds going to benefit G6:2 Outdoors.

“They usually have 20 to 30 hunters every year. It ranges from children to elder age, and it’s a full weekend of hunting. It’s a blast,” said Melissa Reeves, president of the Warren County Chapter of Whitetails Unlimited.

Whitetails Unlimited is a non-profit organization dedicated to nature conservation, and has local and state chapters all over the country. Reeves took over as the Warren County chapter’s president seven years ago and needed to find a local recipient for the funds her group raised. Hope Outdoors was the perfect cause.

Operated by Doris and Randy Rippy, the organization partnered with local landowners to offer free hunting outings for disabled children and adults. It has since changed its name to G6:2 Outdoors — named for the Bible verse Galatians 6:2 — but its partnership with Whitetails Unlimited has remained.

“I wanted to do something with hunting and the handicapped, and this was the perfect thing,” Reeves said.
Individual tickets for the 2021 Whitetails Unlimited banquet cost $35 for adults, $25 for spouses, and $20 for children 15 and under. All tickets include a steak dinner catered by The Gumbo Pot.

Tickets will cost $5 more at the door, but Reeves said there is a chance the event will sell out in advance.  Approximately 250 tickets will be available to help the event comply with current COVID-19 guidelines, and masks will be encouraged but not mandatory.

“Every year it gets bigger, and that’s the problem,” Reeves said with a laugh. “The first year I had 50 or 60 people at the Moose Lodge, and a year or two later we outgrew the Moose Lodge. This year we’re looking at about 220, 230 people.”

In addition to the individual tickets, table sponsorships ranging from $300 to $700 are also available. The sponsorships include eight banquet tickets and other prizes. The $700 Booner sponsorship comes with a gun.

Other banquet attendees will also have the chance to participate in a gun giveaway, raffle and auction. Outfitter packages, firearms, artwork, collectibles and outdoors equipment are among the available items.

Reeves said approximately 250 handguns, rifles and shotguns will be given away at the banquet. Anyone who purchases a ticket before Aug. 24 will automatically be entered into a raffle for a gun.

“We have a lot of guns,” Reeves said with a chuckle.

Reeves also thanked those who have already purchased sponsorships. She said 25 tables had already been reserved.

“I just want to say we have the best community. When it comes to this, once they hear about G6:2 Oudoors and what we’re sponsoring, they don’t hesitate. They say I want to help. Our sponsors since day one have been there every single year, and they even help get other sponsors,” Reeves said. “There’s no way we could do the G6:2 Outdoors hunt if we didn’t have our sponsors.”

A ticket order form can also be found at whitetailsunlimited.com/events/banquets/vicksburg-ms-warren-county-chapter-banquet/