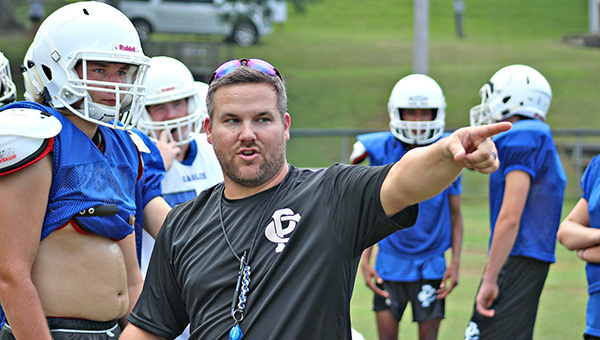 For the past three weeks, Porter’s Chapel Academy has kept things pretty basic. It laid down its base offense and defense, developed some depth, and had some successes and failures.

PCA begins its 2021 football season — as well as a new era in the MAIS’ 8-man division — when it goes on the road to take on Kemper Academy on Friday.

PCA coach Blake Purvis said the Eagles are far from a finished product, but have gotten better during the preseason as they transition from 11-man to 8-man football.

“We made a lot of improvements from two or three weeks ago to this past week. We haven’t taken steps back. We’ve got to continue to do that,” Purvis said. “We are not a polished team yet, but we’re getting there. We’re going from practices to games better than in the long time I’ve been here.”

PCA finished its preseason with a pair of jamboree games last Friday. It lost 12-6 to Tallulah Academy and 18-0 to defending MAIS Class 1A champion Briarfield while playing one half against each.

Purvis said he wasn’t discouraged by the results, noting that he used mostly vanillla schemes on both sides of the ball and gave more reps than usual to some of his younger players.

“We were pretty basic, trying to get a lot of guys reps and coaching up the younger guys. Coming out of the jamboree, your approach has to factor into the results,” Purvis said.
Starting Friday, the results do count.

The new division is almost a new world, though. Only one opponent, Claiborne Academy, was on last year’s schedule. Four of PCA’s 10 games, including the opener against Kemper, will feature first-time opponents. Several others have a history with PCA, but have not played them in five years or more.

Kemper Academy could provide a chance for the Eagles to merge into the 8-man division on a successful note. It reached the second round of the Class 2A playoffs in 2019, but finished 0-10 last season. Its last winning record was in 2017.

“We’re going to run into this a lot, where we have a lot of unfamiliar opponents. We haven’t played anybody on our schedule,” Purvis said. “Just looking at Kemper, they’ve got a good quarterback. He moves around well and makes some throws you never thought would reach anybody.”