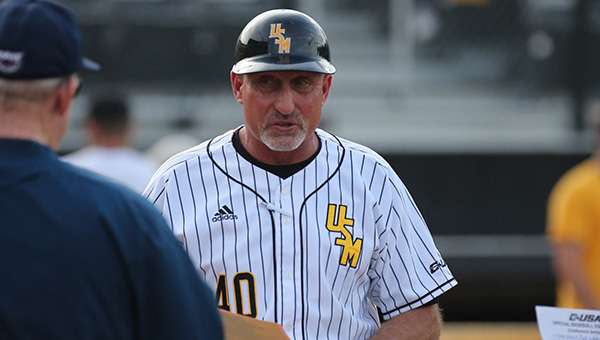 HATTIESBURG — Longtime baseball coach Scott Berry will be sticking around Southern Miss’ dugout a while longer.

Southern Miss Director of Athletics Jeremy McClain announced Wednesday that Berry and the university have agreed to a contract extension. The length and terms were not immediately announced, but the maximum allowed under state law is four years.

Berry, who starts his 13th season as head coach in 2022, owns 435 Southern Miss victories.. He is 34 shy of becoming the school’s all-time leader.

“Scott has does an outstanding job of continuing to develop a nationally competitive program that is built on a foundation of ‘doing it the right way,’” McClain said in a release announcing the contract extension. “We are fortunate to have him leading our student-athletes, and I look forward to their continued success.”

Berry has led Southern Miss to the NCAA Tournament in five consecutive seasons, and seven overall. His teams have won four Conference USA regular season titles and four league tournament titles, and he has been named the C-USA Coach of the Year three times.

Twelve of Berry’s players have earned All-America honors, 33 have been first-team All-Conference USA selections, and 25 were picked in the Major League Baseball draft.

Over the last five full seasons, Golden Eagle squads put together 40 or more wins each year, ranking as one of two Division I programs to reach that plateau at least that many seasons (Dallas Baptist has seven). Southern Miss finished with a 40-21 record in 2021 and reached the championship game of the Oxford Regional before losing to Ole Miss.

The Golden Eagles have also succeeded in the classroom. In all but one of Berry’s seasons as head coach, USM baseball players earned at least one spot on the C-USA All-Academic baseball team while this year’s squad put together a 3.171 grade point average for the 2020-21 academic year.