Flashes kick off the season Friday at Park Place 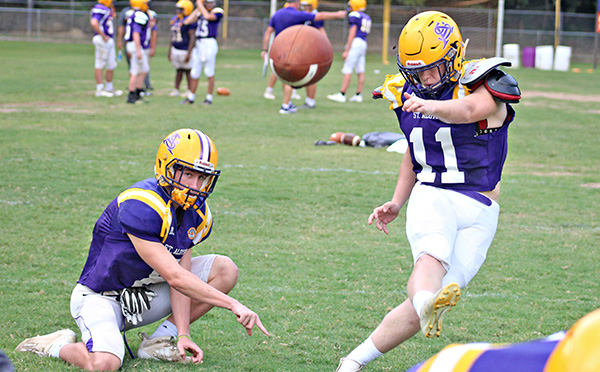 St. Aloysius' Will Dowe (11) kicks a field goal out of the hold of Carter Magee during Monday's practice at Balzli Field. (Ernest Bowker/The Vicksburg Post)

Like every other football team in Mississippi, optimism reigns supreme for St. Aloysius in mid-August.

The Flashes had an impressive showing in their jamboree game two weeks ago. They’ve had a great summer, with a new and enthusiastic coach ready to put his stamp on the program.

Now all they need to do is make sure all of those dreams survive the first week.

St. Al begins the 2021 season Friday night in Pearl, when it takes on Park Place Christian Academy. The Flashes have not won a season opener since 2006, but first-year coach Bubba Nettles feels like this is a golden opportunity to end that streak and launch a successful new era.

“I think it is a perfect opportunity for us to end that streak. To open with a victory, for me it will do nothing but soldify that I can do this. For the kids, it would give them that boost,” Nettles said. “If we can right this ship and keep it headed where it is — because we’re headed in the right direction — we have the opportunity to win a lot of football games this year.”

St. Al’s opening night losing streak technically ended in 2020. Hartfield Academy won 40-0, but used an ineligible player and the game was later ruled a forfeit and St. Al was credited with a victory.

Officially, it is in the books as one of only three victories for St. Al in 13 games played in August since it joined the Mid-South Association of Independent Schools in 2015, but Nettles would like to end the streak on the field rather than with an asterisk.

St. Al beat Silliman Institute 28-7 in a controlled scrimmage two weeks ago. Nettles said his team could have scored a lot more if not for the format that limited each team to 10 plays per series.

“We would have scored on all three possessions, but we ran out of plays,” Nettles said. “I was disappointed with that during the game, because the thought had not crossed my mind that we had to turn it over when we ran out of our number of plays. But then breaking down the film, I realized we were getting 5, 6, 7 yards a pop while getting it correct about 50 percent of the time. Now that we have fixed what was wrong, we should have a huge rushing night Friday night.”

The matchup with Park Place figures to be a contrast of styles. Park Place quarterback Bryson Shupe, a senior, has thrown for 2,850 yards and 26 touchdowns over the past two seasons. He has only thrown 12 interceptions in 359 attempts, and is also fairly mobile with 662 rushing yards in 2019 and 2020.

The Crusaders also have their top three receivers returning. Braden Stewart, Miles Owens and Josh Sykes combined to catch 85 passes last season as Park Place finished 6-6 and reached the second round of the MAIS Class 5A playoffs.

St. Al, meanwhile, will rely on a run-first offense led by Adam Francisco and Padre Gray. Getting them going and controlling the pace of the game, Nettles said, will be a key to winning not only this week but all season.

To slow down Shupe, the Flashes will send a lot of pressure in the form of blitzes. Nettles said he plans to send pressure on most passing downs, which will be a risk-reward proposition.

“In those blitzes, if you get caught in the wrong spot six points are going up on the scoreboard,” he said. “So we’re going to live by it and we’re going to die by it. It’s feast or famine, and I’m hoping we do more feast than famine.”

If the Flashes can feast, Nettles hopes it’s the springboard to a good season. St. Al has only finished with a winning record once since 2015 — a modest 6-5 mark in 2018 — and will have an uphill battle against a difficult schedule in 2021. Right now, though, everything is going well and anything is possible.

“As well as they played that scrimmage game, once I broke the film down I realized we still have a long way to go,” Nettles said. “Any coach worth his weight knows they’ll never achieve perfection. But we broke it down and all last week all we did was focus on fixing everything that I saw wrong that we did. They responded and fixed it, and right now I am way more excited about rolling into Friday than I was. I’m pumped up about it.”