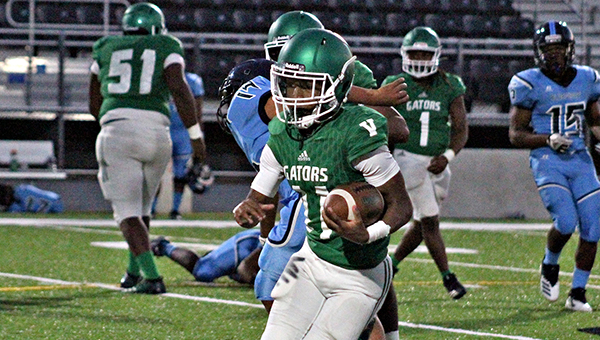 The team’s preseason scrimmage, scheduled for Friday night at Florence, was canceled because of COVID-19 concerns, but it was able to quickly land a spot in a three-team jamboree the same night at Hazlehurst.

VHS head coach Todd McDaniel said it was Florence’s decision to cancel the scrimmage, although the exact reasons were unclear. In a statement, Vicksburg Warren School District athletic director Preston Nailor said it was “a precaution.”

“I’m not for certain. I’m just told the principal thought it was not worth risking COVID,” McDaniel said.

Vicksburg will instead travel to Hazlehurst for its preseason game. It will play a pair of two-quarter games, first against Raymond at 6:30 p.m. and then immediately afterward against Hazlehurst.

It’s the last chance to make adjustments, settle position battles, and get a morale boost heading into next week’s season-opening Red Carpet Bowl matchup against Germantown.

“Morale is key. But, at the end of the day, you always know it’s a marathon and not a sprint. Regardless of what happens on the scoreboard, win or lose, we have to keep working,” McDaniel said earlier this week. “We are nowhere near a finished product right now. It’s a lot of things we have to work on, a lot of things we have to get better at. Friday night will be able to tell us a lot about what kind of team we have. It’s definitely not meaningless. You don’t want to come away from over there with an ‘L.’ But if you do, you have to keep working.”

Under MHSAA rules, teams were not allowed to practice in full pads until earlier this week, so Friday’s scrimmage will mark the first time they’ve had an extended period of full contact action since the spring game in May.

“Hitting a person and hitting a dummy are two different things. You have to get used to a body moving and be able to make contact and get your head across, and anticipate where a defender is going, and hold onto the football,” McDaniel said. “I want to see if we can translate the weight room and all of the techniques and individual drills to the game. That’s what I’m looking for. I can’t wait.”

The Gators are also looking to end a streak of four consecutive losing seasons. They’ll officially start working toward that goal next week, but this week can provide a lift toward it.

“We’ve been going at in fall camp and all summer against one another, and it’s great to finally see a different color jersey and a different group of faces,” McDaniel said. “And it’s also great to get some real film against someone else, to make sure we’re doing our proper techniques, and just to carry that momentum from the spring into the season.”

Vicksburg’s regular-season opener is Aug. 27, at home in the 59th annual Red Carpet Bowl. The Gators will play Germantown at 8 p.m. in the second game of a doubleheader, after Warren Central and Forest Hill play at 5:30.

Tickets for the Vicksburg vs. Germantown game can be purchased at gofan.co/app/events/327895.

Tickets for the Warren Central vs. Forest Hill game can be purchased at gofan.co/app/events/327894.

Tickets cost $10 in advance, or $15 at the gate, and can only be purchased through GoFan.co or the GoFan app.

Ticket links and information on both games can also be found at the Red Carpet Bowl’s Facebook page, at https://www.facebook.com/Red-Carpet-Bowl-Committee-398081750377785.