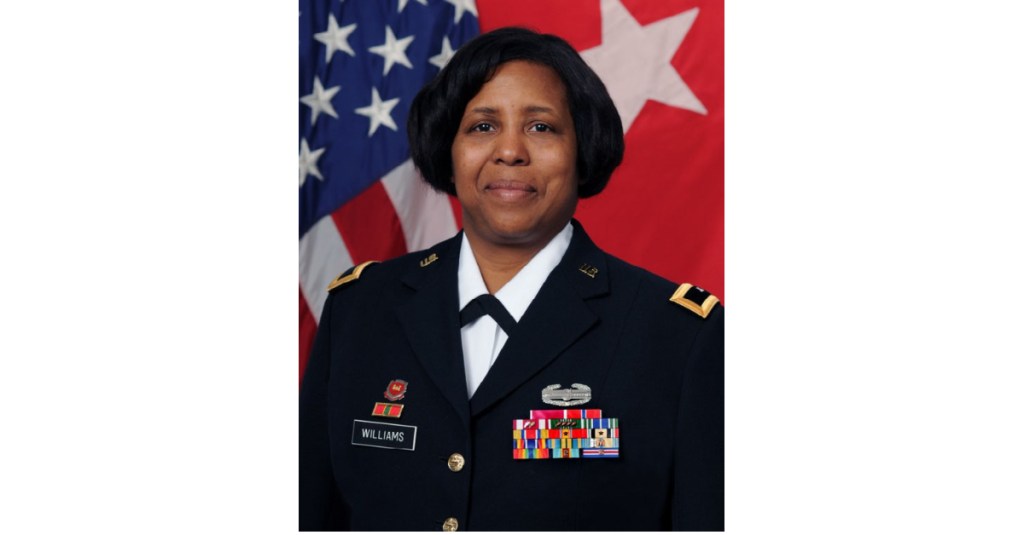 The U.S. Army has announced that Donna R. Williams, a retired brigadier general and computer scientist at the U.S. Army Engineer Research and Development Center, is being inducted into the U.S. Army ROTC Hall of Fame.

She joins 23 other inductees into the 2021 ROTC Hall of Fame, which honors graduates who have distinguished themselves in both military and civilian pursuits.

The ROTC Hall of Fame recognizes alumni who have made significant and lasting contributions to the nation, the Army and the history and traditions of the ROTC program.

According to a press release from the Army, Williams has “consistent commitment to service and dedication to helping others over several decades is the ‘Standard of Excellence’ and is truly worthy of this honor of being a member of the ROTC Hall of Fame.”

As a high-school student in the early 1980s, Williams had no real interest in a military career but decided to follow in her cousin’s footsteps and join the Junior ROTC at Vicksburg High School.

“I thought JROTC looked fun and it was the drill team that really caught my interest,” said Williams. “My cousin and I were like brother and sister and he really enjoyed it. I figured that I would like it, too.”

She was right. She enjoyed it so much that when she got to college, Williams decided to sign up for the ROTC program as an elective course at Jackson State University.

ROTC, which stands for Reserve Officers’ Training Corps, is an elective curriculum offered at colleges and universities across the nation. Upon graduation, senior ROTC participants who choose to enlist in the military are commissioned as U.S. Army officers in designated branches.

“ROTC really brought out a different flavor of being in college,” Williams said of her time as a student at Jackson State. “You start learning leadership, team building, customs and courtesies. You are put in different positions, and you learn how to be proactive and execute skills inside and outside of the classroom.”

Williams admitted that though she was the very last person in her cohort to sign a contract to join the Army, she knows she made the right decision.

On May 10, 1986, Williams officially entered the U.S. Army as a second lieutenant. She returned to her hometown of Vicksburg and joined the Army Reserve 412th Engineer Command as an engineer officer, where she stayed until 1990.

From 1990 until 2014, Williams served in the Active Guard Reserve, a job that took her from Fort Bragg, N. C., to Maui, Hawaii, Germany, Korea and many places in between. In May 2006, she deployed to Baghdad in support of Operation Iraqi Freedom, serving as the Army Sustainment Command’s Logistics Civil Augmentation Program support officer.

In 2015, she was promoted to brigadier general.

“As luck and faith would have it, they brought me back to Vicksburg as the deputy commanding general of the 412th Theater Engineer Command,” Williams said. “I couldn’t believe I was coming back home — not just home to Vicksburg, but home to the 412th where it all began. I started off there as a junior leader and finished as a senior leader.”

Decades after being hesitant to sign her contract with the Army, Williams retired in 2018 after more than 31 years of military service.

“I enjoyed every day of my military career despite the many challenges,” Williams said. “The professional and personal growth that I experienced while I was in the military was priceless. It postured me to do my best and use the resources I had, and to be innovative in a dynamic and fast-paced environment.”

Today, Williams works at the U.S. Army Corps of Engineers Reachback Operations Center, also called UROC, which is part of the ERDC, and she says her job is enjoyable and professionally rewarding.

“Our team supports organizations throughout the Department of Defense and the federal sector,” Williams explained of her role as team leader for the UROC’s request for information team.

“We receive requests from the field and contact subject-matter experts who provide innovative ways to address their engineer challenges so they can accomplish their mission.”

Though she didn’t realize it at the time, Williams said the ERDC’s overhead protection technology kept her safe during her deployment to Iraq in 2006.

“Rockets came in all the time, and that overhead cover was valuable for force protection,” Williams said. “What a joy I have to be part of a mission that keeps our military coalition safe on the battlefield. Being at the UROC with the ERDC continues to give me the opportunity to serve the common defense of our nation, and that’s what I enjoy doing.”