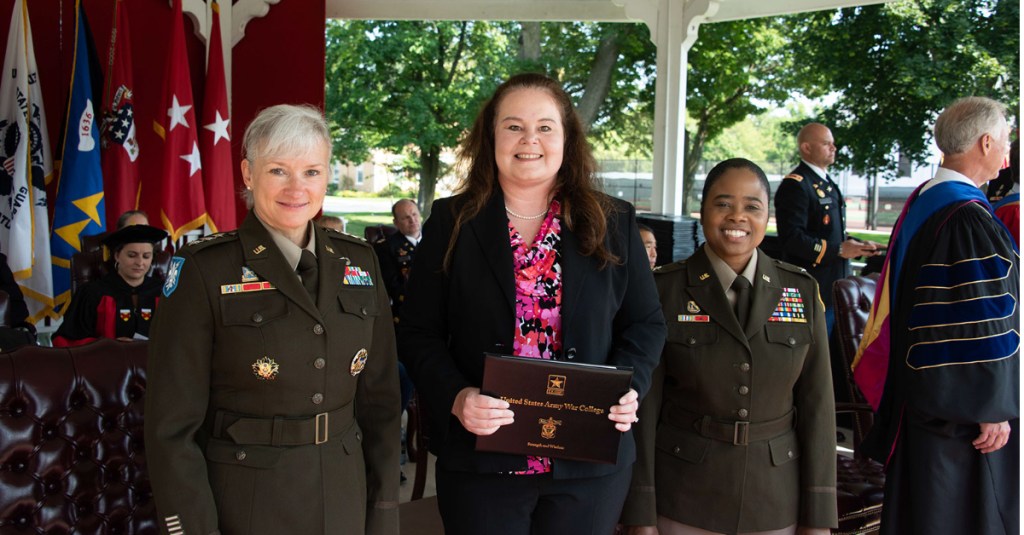 Bednar, who works as a research mathematician in ERDC’s Information Technology Laboratory (ITL), decided to apply as a way to strengthen her skills in the workplace. She graduated on July 23, 2021, with a master’s degree in strategic studies.

“I work mainly on military projects and wanted to understand the warfighter perspective better, especially at the strategic level,” explained Bednar, a Vicksburg native who has worked at the ERDC for 12 years.

Through the Army’s Senior Enterprise Talent Management program, Bednar earned a civilian spot in the distance education program, which is a fast-paced, two-year curriculum with no breaks. Her experience was mostly virtual with the exception of a two-week residence course that ended with graduation.

“It was two long years of hard work, and there were many times I wanted to give up. It was hard balancing work, school and family,” said Bednar, who was recognized as a superior graduate in the top 11 to 30% of her class. “Overall, it was a great experience, and I’m glad I did it.”

Through the classes, Bednar said she gained valuable perspective that will help her day-to-day work at the ERDC.

“I am improving my understanding of the warfighter challenges at the strategic level, and as a result, I better understand the issues confronting the Department of Defense and the U.S. Army Corps of Engineers now and into the future,” Bednar said.

And for ITL Director Dr. David Horner, the education and skills Bednar gained from the Army War College are invaluable to the organization’s mission.

“ITL works to solve our military’s toughest challenges, and this experience will better equip Dr. Bednar to support those goals,” Horner said. “I’m happy that she took the initiative to pursue this very challenging program, and I’m proud that she put in the work to graduate.”

Bednar’s distance education class consisted of 391 students, all competitively selected from the military, federal agencies and countries around the world. The program provided her the opportunity to work closely with a  diverse cohort from outside her organization.

“My first year, I was in seminars with two international fellows,” said Bednar. “They have a different culture, which brings more breadth and perspective to the discussions.”

In Bednar’s second year, she studied alongside government civilian and military personnel from the Army, Marines, Air Force, Department of State and Department of Homeland Security, as well as National Guard and Reserve components.

“Having a diverse group allows for better discussions and debates because we are coming in with our different backgrounds and mindsets,” Bednar said. “It also provides us the ability to understand different viewpoints.”

Bednar graduated from St. Aloysius High School before earning her bachelor’s from Spring Hill College in Mobile, Ala., as well as a master’s degree and doctorate from the University of Mississippi.

Headquartered in Carlisle, Pa., and founded in 1901, the U.S. Army War College was first established as a way to address military failings discovered during the Spanish-American War. Today, the institution aims to produce graduates who are skilled critical thinkers and complex problem solvers through high-quality professional military education, research, discourse and wargaming, and strategic leader development.