Warren Central speeding through the preseason 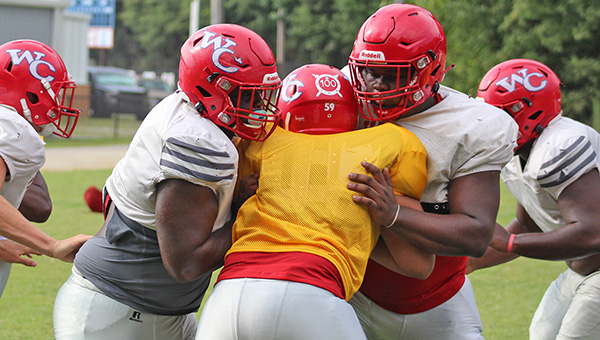 Warren Central isn’t wasting any time in getting its football season started.

On Friday, just 10 days after their first official practice and four after they put on pads, the Vikings will face an opponent for the first time when they host North Pike in a preseason scrimmage at 6 p.m.

The game won’t count in the standings, of course, but will follow the flow and rules of an official game. The teams will play the first half with standard rules, and the second with everything but special teams plays.

“We treat it just like a game, for multiple different reasons. I think that helps us to treat it like a game — game situations, clock management, special teams — and get everything we can out of it,” Warren Central coach Josh Morgan said.

What Morgan and the Vikings also hope to get out of it is a taste for contact and an idea of where they stand heading into next week’s Red Carpet Bowl opener against Forest Hill. Getting a chance to see what areas need improvement, Morgan said, was the primary goal this Friday.

“Just your typical first game stuff. There’s going to be some stuff we need to clean up. We know that before we ever play,” Morgan said. “Getting them on tape, getting them on the field, putting them under the lights and going from there. The biggest thing is playing. We’re looking forward to it, and getting those areas addressed so we can get better and move on.”

Unlike bygone eras when teams endured two-a-day practices for nearly a month leading up to opening night, the 21st century high school football calendar has been condensed.

Teams now work throughout the summer — Warren Central practiced four days per week in June and July — but are not allowed to have an official preseason practice until two weeks before their first game. The first week of practice is dedicated to heat acclimatization, and they’re not allowed to put on pads until the second week.

That leaves only a few days of practice before settling into the game week routine, and makes the scrimmage even more important,” Morgan said.

“(Monday) was the first day we put full pads on, so we’re literally right in the middle of training camp as far as I’m concerned. We’re still a work in progress and have a lot going on,” Morgan said. “That’s why the summer is so important. You literally go full pads the week you start playing your jamborees. I feel good about where we are and what we’ve done, as far as what we could do. So this will be a really big week for us.”

Morgan said this will be an important week for a young roster. All of the Vikings’ defensive line starters and most of the secondary graduated, leaving a host of first-year players to step up into bigger roles. Getting them some game experience and evaluating their performance also makes this exhibition game far from meaningless when it comes to player development.

“We want to get a lot of reps. We still have some questions as far as our depth chart, and competition for spots,” Morgan said. “It’ll be really important on evaluating and seeing those first-year starters and young guys who have bigger roles. We’ll also be evaluating the kicking game. It’s a big evaluation process and very important.”