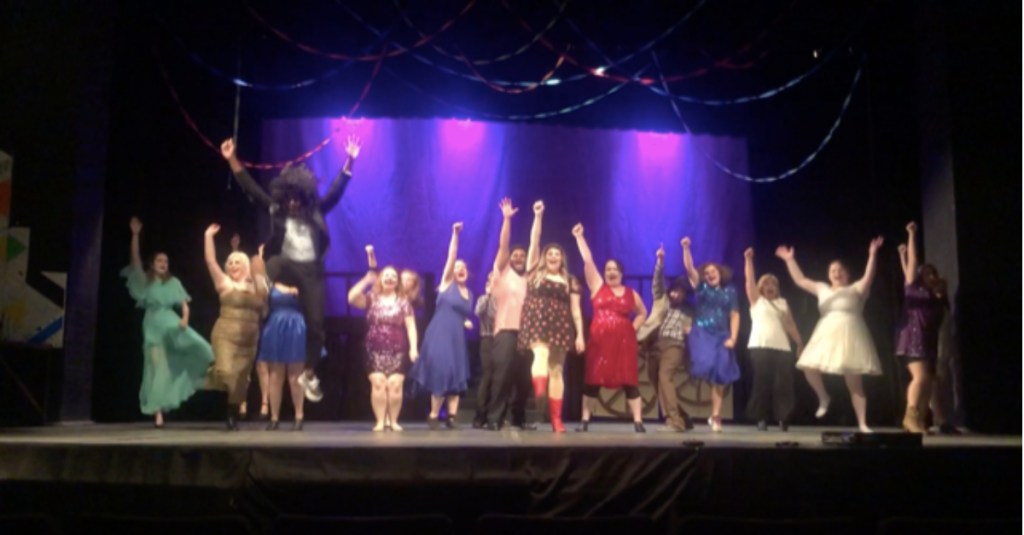 The Vicksburg Theatre Guild will present 'Footloose' this weekend and next at the Parkside Playhouse Theatre. (Photo submitted by Genevieve Walker-Rushing)

In the small town of Bomont, a local pastor rails against Rock and Roll music and forbids dancing.

But when a Chicago teen moves there with his mother, he literally shakes things up.

Put on your dancing shoes and get ready for an evening of fun and entertainment as the Vicksburg Theatre Guild performs the Broadway production of “Footloose.”

Based on the 1984 film of the same name that starred Kevin Bacon, the VTG production opened on Aug. 20 at the Parkside Playhouse Theatre, 101 Iowa Ave.

Rehearsals for the “jukebox” musical began about three months ago, director of the local production Genevieve Walker-Rushing said.

“The group started practice at the end of May. For the first few weeks, we just rehearsed music in the lobby with one day a week on stage to work on the dances. It really is a miracle we learned it all,” Walker-Rushing said.

Because of the large number of dances in the production, Walker-Rushing said she recorded videos of each dance and uploaded them so the cast could practice at home. A majority of rehearsal time went to the dancing.

“A lot of them (the cast) would play them on their TVs to practice while getting ready for work in the mornings,” she said. “And it shows. It is not easy choreography. All of the songs are fast and upbeat, but the cast has really ‘cut loose.’”

The production is comprised of a 20-member cast which includes Clarence Shelby Jr. as Ren McCormack, the leading male character.

“I have known Clarence since high school, and I cannot imagine a more perfect Ren,” Walker-Rushing said.

Celeste Constancio will take on the leading female role of Ariel.

Walker-Rushing said Constancio has done an “amazing job,” as has Ken Posey who plays the Bible-thumping Rev. Shaw Moore.

“He does a wonderful job of taking his role and making the reverend a lovable character despite his rigid demeanor,” Walker-Rushing said.

“Their (Veazey and Cochran) interactions are hysterical on stage,” Walker-Rushing said.

Cranston is the farthest thing from being a bad guy Rushing said, “But he is so talented he makes it work. I could honestly gush about my entire cast.”

In addition to her “talented” cast, Rushing also praised those working behind the scenes.

“Ace Dixon is running our lighting for the first time, Michael DeJesus is running the fly, and my sweet, patient husband is running sound. This show could not happen without them. Sarah Goss has been so helpful,” Walker-Rushing said.

Much of the scenery has either been donated or repurposed and costuming for the show will be reflective of current styles instead of the original 1980s setting.

“I decided to go with a more modern feel with the costumes for a number of reasons; mostly to be conservative of our time, energy and budget. For the prom scene, however, you will see plenty of bright colorful vintage-inspired looks,” Walker-Rushing said.

As an added feature of the production, audience members will be invited to join the cast in the last production number in the performance.

“Ren is going to invite anyone in the audience who wants to join us in the aisle to dance along during the show’s megamix,” Walker-Rushing said. “People might not participate, but we thought it was worth a shot.”

Be on the lookout for a video to use for practice. Walker-Rushing said they were going to try and post one through Facebook Live.

“If that plan doesn’t work, I am just going to film a video and post it to our Facebook page,” she said.

The Parkside Playhouse Theatre will follow the City of Vicksburg’s mask mandate.

“If you’ve ever thought about coming to see a show, this is the show to see,” Walker-Rushing said. “It’s fun, it’s uplifting. You’ll laugh, maybe even cry. It has everything we could all use a little more of during this stressful time.”