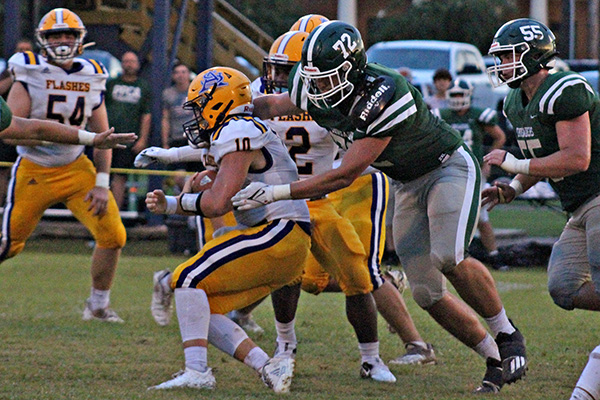 PEARL — The first 90 seconds of St. Aloysius’ season opener will rival any game in Mississippi this season for sheer excitement.

That hardly means the Flashes will be bragging about it, or the final outcome, on Saturday morning.

St. Al and Park Place combined for three kickoff return touchdowns — and nearly a fourth — to start the game, before Park Place took control and rode a big first half to a 40-26 victory on Friday night.

Bryson Shupe threw two touchdown passes and ran for another score, while Josh Sykes had one of Park Place’s kickoff return TDs and caught five passes for 96 yards and a touchdown. Park Place scored all of its points in the first half.

“You erase the first quarter and it’s a completely different ballgame,” said Bubba Nettles, who was making his debut as St. Al’s coach. “They came out and to be honest with you I don’t know what was going through their brain. I guess the excitement, the nerves, but that was some of the worst football I’ve ever seen. Then once we settled in and started playing our level of football it was too late.”

St. Al’s losing streak in season openers reached 15 — on the field, at least; a loss to Hartfield Academy last season was later flipped to a forfeit win — with Friday’s setback.

The Flashes rushed for 188 yards in the game and held Park Place to 15 total yards in the second half, but couldn’t overcome a terrible first half performance.

“We did everything we could to scratch and claw our way back into it, and for that I’m very proud of them. That’s what we do. We’re going to give you everything we’ve got,” Nettles said.

A wave of late afternoon thunderstorms cleared out in time for kickoff, but Park Place and St. Al provided some lightning in the game’s opening moments.

Sykes returned the opening kickoff 81 yards for a Park Place touchdown, and then Adam Francisco answered with a 78-yard touchdown for St. Al on the ensuing kickoff.

St. Al kicked off again, only to watch Braden Stewart go 86 yards for another score. Francisco, not to be outdone, returned Park Place’s kickoff 57 yards to set up a 13-yard TD run by Padre Gray on the next play.

When the flurry was over, Park Place held a 14-12 lead thanks to a missed PAT and a missed two-point conversion by St. Al.

“We planned for it, for Adam’s kickoff return. We knew they liked to sky kick it and I drew it up and showed them how I wanted to block it and hit it right up the middle. That’s exactly what happened,” Nettles said. “But whatever the heck that was on our kickoff coverage I’m going to fix it, I assure you.”

Even though the game was still close, Park Place’s offense got rolling long before St. Al did — and with more big plays than the Flashes could muster.

Late in the first half, Shupe led an 82-yard scoring drive in the final two minutes. He turned a potential broken play on a high snap into a 28-yard gain, then completed a 29-yard pass to Sykes. William Harrington ripped off a 22-yard touchdown run to finish it as the Crusaders took a 40-18 lead into halftime.

“Every worst-case situation you could possibly imagine occurred, and we are not to where we can withstand those type of blows and be able to battle back from them. We’re going to get there, but we can’t do it,” Nettles said.

St. Al not only stopped the bleeding after halftime, it stopped Park Place cold. The Crusaders only had two first downs and 15 yards on four second-half possessions, and did not score.

St. Al also had its chances to get back in the game, but kept hurting itself.

An illegal block penalty stalled one drive inside the 20. Another illegal block, coupled with an unsportsmanlike conduct penalty, wiped out a big run by Wilbanks and moved the ball from the Park Place 25-yard line all the way back to St. Al’s 35. That drive ended with a punt.

Wilbanks did throw a 15-yard touchdown pass to Chase Tucker with 4:01 left to cut it to 40-26, but the Flashes didn’t get the ball back until only 1:42 remained and they opted to run out the clock.

Seven of St. Al’s eight penalties came in the second half, and it totaled 80 yards worth of flags.

“I think frustration set in,” Nettles said of the penalties. “Getting tired, antsy, wanting to do good and please. They were battling quicksand and fighting their way out of it. Once you’re in it and fighting it, you’ll never get out of it.”