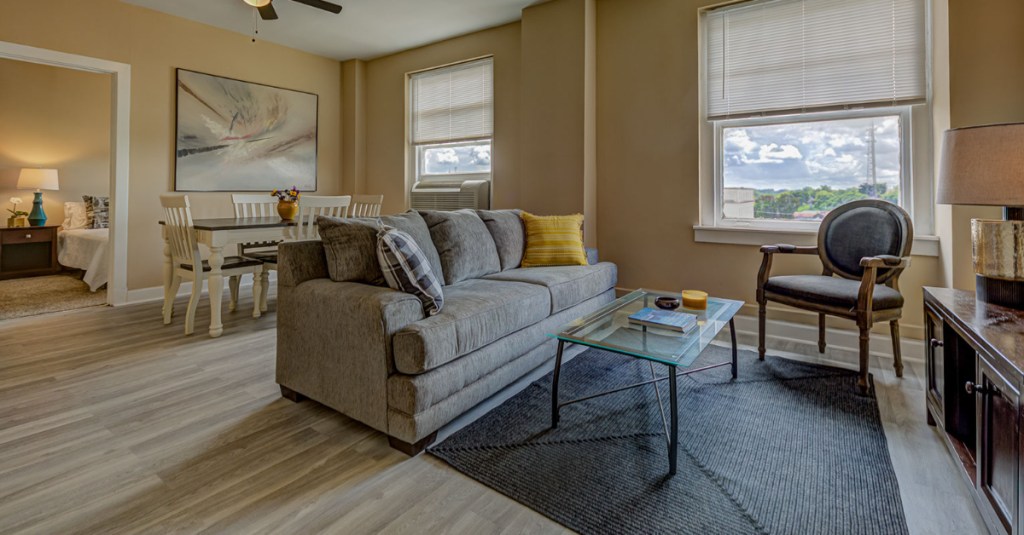 Vicksburg’s oldest standing hotel, which has been converted to apartments, is in the process of renovations by its owner to preserve the history while creating a modern experience.

The Vicksburg opened in 1929 mainly as a traveling men’s hotel. In 1975, it closed as a hotel and was purchased three years later by Joel Alexander, who converted the 203 hotel rooms into 54 apartments. Beth McFarland’s father bought the building in 1981. McFarland now owns the building and is doing the renovations on the 92-year-old original hotel.

“We just want to preserve it,” McFarland said. “That’s our goal.”

“They left enough that we have been able to preserve these things for future generations,” McFarland said. “Vicksburg is very fortunate to have a building that has so much left and so many architectural antiques here in the building.”

The renovations started with the common areas such as the mezzanine level, the original lobby and the ballroom. Complete renovations of 26 of the current 60 apartments have been completed, as well as refurbishing all of the rest except for 10, which are currently occupied and unable to be done at the moment.

“Of course, the apartment (renovations) are important because they bring in income and to be a viable business we needed the income from the apartments,” McFarland said.

The apartments still contain the historical and original aspects that the rest of the building also holds. The bathroom tile is original to what it was during the building’s time as a hotel. Many of the apartments also include the original big hotel bathtubs or marble showers. McFarland said they didn’t take out anything that wasn’t absolutely necessary to get rid of.

“Those bathrooms are just like they were, for the most part, in 1929 which is really cool,” McFarland said. “I think that our residents enjoy the luxury of a modern apartment but in a very historic setting.”

McFarland said the building has a long-standing history of being a meeting place for the community, and she hopes to return it to its ways. Prior to the COVID-19 pandemic, they started holding yoga classes in the coral room and events in the tea room. McFarland said she is getting requests now to host weddings and class reunions and is monitoring the COVID-19 situation for when they will begin hosting events again.

One significant event that occurred at The Vicksburg, McFarland said, was in 1947 when Eisenhower alluded to his intentions to pursue the presidency in the ballroom.

“That ballroom has a very significant part of American history attached to it,” McFarland said. “[The Vicksburg] speaks to the history of Vicksburg.”

For apartment information and event inquiries, visit their website here.