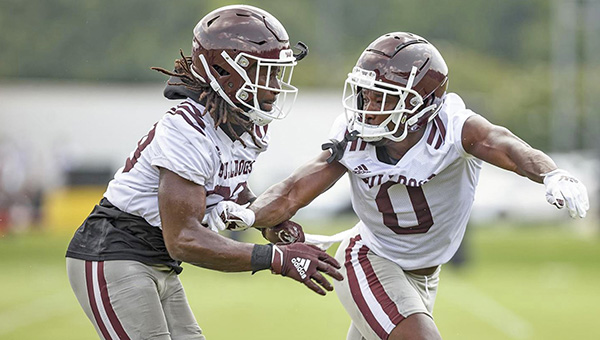 STARKVILLE — Perhaps no position had to adopt the “next man up mentality” more than Mississippi State’s safeties in 2020.

Depth at that position grew increasingly thin as the year progressed and the Bulldogs ended up starting seven different players across their three safety spots.

The benefit of that now is that six of those starters are back and bring with them a wealth of playing experience gained throughout last season.

“With all the injuries that happened last year, that just added more playing time for everybody else,” said senior safety C.J. Morgan. “Over the course of the year, guys have gotten bigger, faster and stronger with our strength staff and guys have gotten their football I.Q. up. Now we’ve got a full safety room and guys are ready to play.”
In total, MSU has 14 safeties on its roster — 11 of which are on scholarship. Of that group, eight have starting experience during their careers, led by Morgan’s 12 starts.

However, all of Morgan’s starts came in the 2018 and 2019 seasons and he missed all of 2020 due to injury. He owns 84 career tackles, three interceptions and has broken up eight passes.

“I feel like we’ve got a really good group of safeties,” Morgan said. “Depth is pretty deep this year. We’ve got some safeties that’ll be able to play all season. We’ve got some young guys that if their number is called at some point in the season, they’ll be ready to go. We’ve got some guys who were injured last year that are back like myself who are ready to go.”

Walk-on success story Londyn Craft, who has since earned a scholarship, drew eight starts at strong safety last season. The now redshirt senior recorded 56 tackles, 1.5 tackles for loss and recovered a fumble in 2020. He picked off a pass in the end zone during State’s first fall scrimmage this preseason.

The 6-foot, 205-pounder believes he has a shot to be even better this time around now that he has had another offseason to study up on Zach Arnett’s defensive scheme.

“I feel like I’ve made some strides and going deeper into the playbook and knowing every position in the secondary,” Duncan said. “I’m helping guys out and bringing other guys along with me as I progress and get better each and every day.”

“Bulldog” and another at strong safety. He returns as the team’s third-leading tackler with 65 stops, including three tackles for loss.

Fred Peters is back for his second senior campaign after having last season cut short four games in due to an injury. The 5-foot-10, 205-pounder started all four of those games at free safety and was a key back-up for the Bulldogs in 2019.

“I think it’s a tremendous blessing to have a guy like Fred Peters back full speed,” said nickelbacks coach Tony Hughes. “He was having a good year before he went out with that injury. Having an experienced guy like him back full speed really makes a difference for us back there.”

The only other safety with FBS starting experience is Texas transfer Jalen Green, although all eight of his career starts came at cornerback. The 6-foot-1, 200-pound senior had 30 games of experience with the Longhorns and is currently working at “Bulldog” under the tutelage of his former cornerbacks coach at Texas, Jason Washington.

“Moving from corner to safety is a huge difference,” Washington said. “Just moving inside is a totally different world. We’re continuing to try to work on consistency with him just to try to get out of some of the corner habits and get more into the safety habits and all the field that he has to cover.”

There are, however, some of Green’s cornerback attributes that translate and are serving him well at safety.

Green racked up 46 tackles across three seasons at Texas along with three for loss, eight pass break-ups and one interception. He enrolled at Mississippi State in January so he has had some time to acclimate himself to his new surroundings.

Redshirt sophomore Dylan Lawrence and walk-on Cody Swanson are the only other safeties with experience, having appeared in one game each. Kyle Cass and Janari Dean both redshirted last season and Corey Ellington joined the team in June.

With all the experience and depth he has returning, Washington has been encouraged by the progress his group has made through during training camp.

“I think they’re moving along pretty good,” Washington said. “Our biggest thing is to continue to work on consistency, understanding formations, getting lined up and doing some of the little things that allow us to be successful. Overall as a group, I think they’re working hard. Guys are supporting each other and getting each other right.”