Sports column: Vaccines can help teams make their own luck 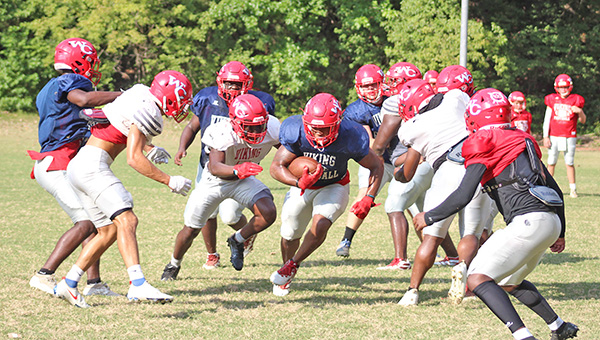 Warren Central running back Darius Carter breaks through the line for a big gain during a practice last week. Warren Central will open its 2021 season Friday at 5:30 p.m., against Forest Hill in the Red Carpet Bowl. The game will be played at Vicksburg High School. (Ernest Bowker/The Vicksburg Post)

The first footballs of the season flew through the air on Friday night. Softball bats have been pinging and soccer balls thumping for a couple of weeks already. It’s the start of a new high school sports year, when even the worst teams think themselves capable of a state championship and nothing is beyond reach.

Right now, it’s also when swabs are going up noses, vaccines are going into arms, and school boards are weighing the merits of distance learning. It’s the age of COVID-19, and it’s not going away.

In August 2020, there was plenty of uncertainty about whether there would be a fall sports season at all, at any level. A number of state associations and college leagues around the country canceled or radically altered their schedules. There was a sense, however, that the worst might have already passed and, with a few sensible precautions, we could play the games we so dearly love and regain some normalcy in our lives.

In August 2021, we’ve somehow stumbled backward. On the eve of this football season, COVID cases were spiking to numbers not seen in months. The vaccines that promised us an easy way out of this mess might not be as effective as once thought, and a large number of people refuse to take them anyway.

Rather than cresting Pandemic Mountain, we’ve merely dipped into a valley with another daunting peak in front of us. Every day brings the possibility of a COVID outbreak in some school or among a team, or an administrative decision to close in-person schooling for a spell and suspend athletics along with it.

The prospect of another shutdown brings with it an ominous feeling, more akin to the start of the pandemic 15 months ago than where we should be this far into it.

Our teams in Warren County were fortunate last season. They had no major COVID outbreaks during the fall football, softball and soccer seasons, and in fact benefited from problems at other schools.

Warren Central and St. Aloysius both earned key district wins because of opponents’ troubles with the virus. Vicksburg had some cases before its playoff game against Grenada that left it short-handed, but it was still able to play. Even in the winter season, when St. Al and Vicksburg had to temporarily shut down their basketball teams because of outbreaks, it was early enough in the season that it didn’t ruin everything.

Our teams were fortunate, or maybe just lucky. And luck will only carry you so far before it turns — unless you make your own luck. In this case, that means getting vaccinated.

Yes, I understand some of the arguments against it. No one, including me, likes it when the government tells us to do something. But let’s face it. If you’re in a number of group settings such as a school, locker room or stadium where an airborne virus could run rampant, it’s not a bad idea to protect yourself when the means to do so are easily available.

The most successful teams make their own luck through preparation and attention to detail. The ones standing tall at the end of this season might also do it by swallowing some pride and sticking a needle in their arm.

Ernest Bowker is the sports editor at The Vicksburg Post. He can be reached at ernest.bowker@vicksburgpost.com.