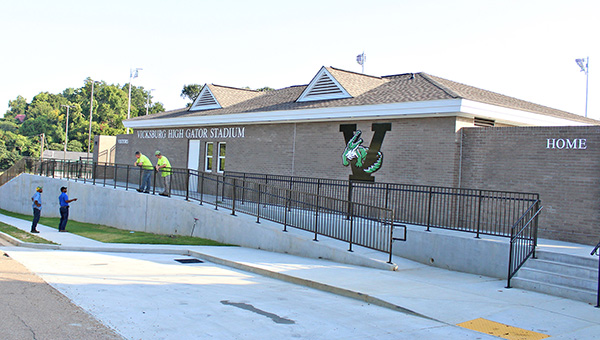 It has been nearly two full years since a football game was played at Vicksburg High’s Memorial Stadium. When fans return this Friday for the season-opening Red Carpet Bowl doubleheader, they’ll find that a lot has changed.

In addition to a physical renovation of the stadium, the Vicksburg Warren School District is implementing a new traffic plan for Gators’ home games this season.

The traffic plan will turn Army Navy Drive into a one-way street flowing away from the stadium on game night, and will be in effect from one hour before kickoff until about 30 minutes after the game. It will go into effect at 4:30 p.m. for the Red Carpet Bowl, and 6 p.m. for all other home games.

VWSD athletic director Preston Nailor said the new plan is an effort to maximize the limited parking around Memorial Stadium, as well as improve pedestrian safety and traffic flow.

“It gives us a little bit of accountability of how we can use the parking that we have,” Nailor said. “Now we can park all the way around Stadium Drive and don’t have to worry about traffic coming up when it’s dark and they can’t see people walking. It creates a safer atmosphere because everybody will know where the traffic is flowing.”

Beginning one hour before kickoff, cars will not be allowed to turn onto Army Navy Drive from Confederate Avenue, toward the City Park softball fields, City Pool, and Memorial Stadium. Traffic should instead approach the stadium by turning from Washington Street onto Lee Street, or from Drummond Street.

Street parking is permitted on Army Navy Drive, away from the stadium on Lee and Drummond, and on Stadium Drive which loops behind the stadium. Stadium Drive is also a one-way street, with the entrance at its intersection with Drummond Street and the exit at Lee Street.

Drummond and Lee are the same street, but swap names at their intersection with Army Navy Drive.

Other parking areas are also available, including a limited amount of handicapped parking in front of the stadium. Vicksburg police will patrol the parking areas during the game.

“We do have limited parking. We’re going to utilize every piece of parking we have on site — the new baseball parking lot, around Stadium Drive, the new parking lot up top — everything but the school parking will be utilized,” Nailor said.

Making Army Navy Drive one-way, Nailor added, will improve traffic flow by allowing cars to park on both sides of the street and then simply merge into postgame traffic. After the game, all cars parked on Army Navy Drive will be routed up that street and onto Confederate Avenue.

“That’s the point of going one direction. If we need to park on both sides we can, and nobody’s coming down the hill,” Nailor said.

Drummond and Lee will remain two-way traffic as it passes the new entrance to the stadium. The recent renovation flipped the home and visitors’ stands, so that the ticket office and only entrance and exit to the stadium are on the Drummond/Lee side.

Visiting fans must walk around the perimeter of the football field to the opposing bleachers, and there will be no entry permitted at the old Stadium Drive gate.

Red Carpet Bowl tickets cost $10 in advance or $15 at the gate. Fans buying tickets at the gate must also use the GoFan smartphone app or website.

With a lot of new procedures to process, Nailor offered a bit of wise advice for fans.

“Get there early,” he said.