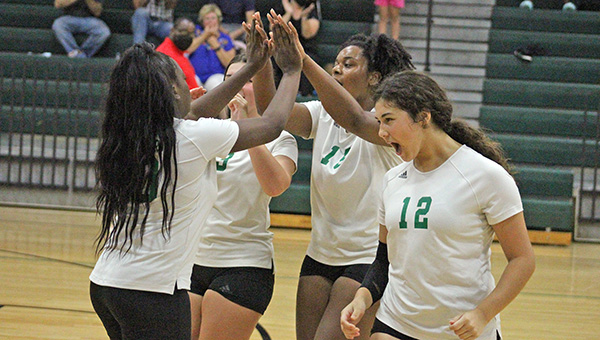 Vicksburg High’s volleyball team is off to one of the best starts in the program’s 11-year history. Now it just has to solve a problem that’s been vexing it the entire time.

“I’m more than happy. I’m elated to be off to a good start,” Vicksburg coach Deborah Brown said. “I have a lot of freshmen playing, and they’ve brought a lot of fuel to this team. It’s making the veterans play and we’re gelling together, we’re communicating and we’re having fun. I think with us communicating and having fun, that’s going to carry us through the season.”

The Missy Gators will take a break from region play to host crosstown rival Warren Central Thursday at 6:30 p.m. at Vicksburg Junior High. Warren Central is 21-0 in the series that began when both schools started their volleyball programs in 2011. Vicksburg has only won three games in those 21 matches.

Warren Central lost 3-1 to Puckett on Tuesday to drop its record to 1-4 on the season.

“It’s a fun game, but it’s for bragging rights and everything. I’m ready to give them a little taste of volleyball,” Brown said with a smile.

Even if their history with Warren Central is not good, the Missy Gators are riding a wave of momentum after dispatching Florence on Tuesday.

Neither team led by more than five points in either of the first two games, but Vicksburg used a pair of decisive runs late in each to win. They scored four of the last five points to win 25-22 in game one, and 11 of the last 13 to take game two 25-21.

Vicksburg fell behind 19-14 in the second game before rallying.

“Us working together, the cohesiveness we built over the course of the game, and then just learning where their serves are and their holes are and getting more consistent on our sets is what helped us the last two sets,” VHS senior Mary Katherine Archer said.

The third and final game was a breeze by comparison. The Missy Gators started with an 8-1 run, and Charli Van Norman served for six consecutive points to make it 19-8. After Florence broke serve and scored two points, Archer won the next one with a block at the net to blunt the momentum.

Archer’s block was the first of six consecutive VHS points to finish the match.

“Those big plays always just build morale,” Archer said of her block. “It makes you feel a whole lot better. If you messed up earlier in the game it brings you back and brings your team back together and gives you enough energy to go on and win the rest of that set.”