Plan for Mississippi Arts Pavilion in Vicksburg canceled due to lack of funding, organizer said 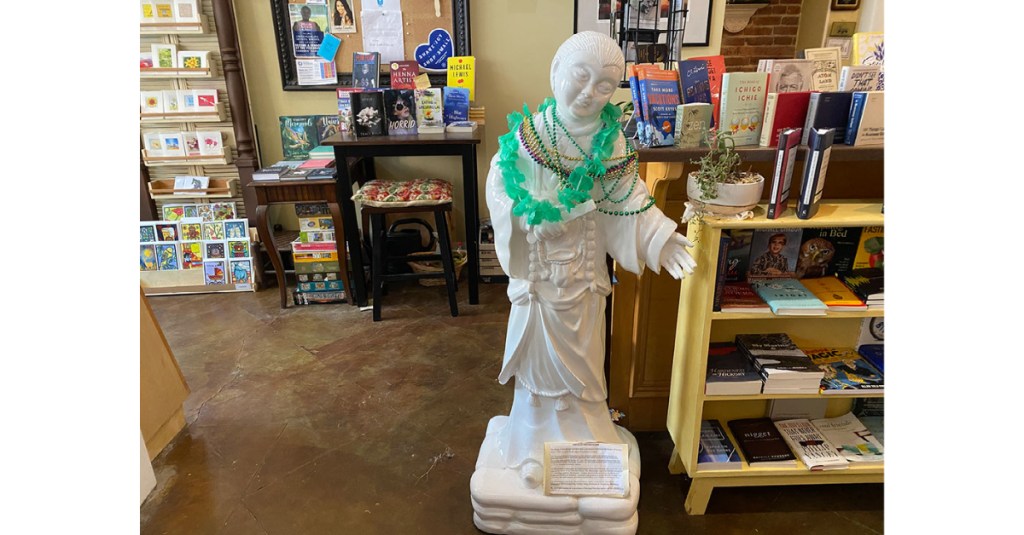 A Porcelain Princess on display in Lorelei Books is one of 10 that Jack Kyle sold to businesses in Vicksburg to raise awareness for his project, which has now been discontinued. (Photo by Olivia Mars)

Jack Kyle saw something was missing to promote Vicksburg as a tourist destination — a Mississippi Arts Pavilion — and he worked for three years to make it happen, only to cancel the plan earlier this spring.

Kyle said he had a vision of a landmark containing exhibition halls, permanent galleries, public spaces and a gift shop. His hope is that it would draw people to not just stay in Vicksburg for half a day spent at the Vicksburg National Military Park, but spend the whole day in the city while visiting the pavilion and other attractions.

“Vicksburg had a great potential to present international exhibition projects due to four major factors I believed would make the project a great success,” Kyle said. “One was that Vicksburg presents the largest single tourist attraction in the state of Mississippi: The Vicksburg National Military Park. Two was the resurgence of the overnight passenger riverboats calling on Vicksburg. The third factor was that Vicksburg was on a major interstate corridor. The fourth was that, of course, I had organized successfully four world-class international exhibition projects in Jackson.”

Kyle and his team were raising money for the pavilion by selling “porcelain princess” doll statues for $1,000 to businesses in Vicksburg. In addition to contributing to funding, the dolls were meant to raise awareness about the project. Of his goal to sell 30 of the statues, he sold 10.

After devoting three years of his life to the project full-time while taking no salary and spending much of his own money, Kyle said there didn’t seem to be much excitement in Vicksburg about the project and there was a lack of funding forcing him to let go of the project.

“I’m certainly disappointed we were not able to bring the project to fruition in Vicksburg,” Kyle said. “I suppose it really just wasn’t a priority of the community. I’m not trying to blame anyone for it not being realized, but I suppose Vicksburg really doesn’t want a project like this, or people would have gotten behind the project in a more supportive manner.”

He said he faced hurdles with some leaders and organizations in Vicksburg that are essential to the success of a project like this. He wasn’t able to get presentations with the Visit Vicksburg Board or Chamber of Commerce and Economic Development. Although Kyle said he had great support from Mayor George Flaggs Jr. initially and board members of Vicksburg’s Mississippi Commission for International Culture Exchange, the community as a whole didn’t prioritize the project as needed.

Although the COVID-19 pandemic did provide some struggles regarding funding for the project, Kyle said he doesn’t believe it was the main contributor to the outcome of the project. In his opinion, even if COVID-19 was never a factor, the project would not have succeeded in Vicksburg.

“The pandemic really affected everything in terms of receiving the funds from the legislature that would have been vital to realizing the project but we were still not on any priority list of the City of Vicksburg,” Kyle said. “If you take away 2020, the major year of the pandemic that caused a halt to everything, it was still three years that I devoted to the project starting in 2017 and we were not able to raise any substantial funding for the project so I’m just not sure it would have happened in Vicksburg.”

Kyle said while it was a factor, COVID-19 was more just the last nail in the coffin. Still saddened by the loss of the project, Kyle said he loves Vicksburg and is so thankful for those who supported his vision for the pavilion. He wanted to thank people who supported the project financially or with encouragement.

With the discontinuation of the project, Kyle said he has $15 million of artwork on his hands. He has no current plan for it and is trying to find a proper project that could utilize the art.

“I still believe that Vicksburg has the assets that could make a project like this successful,” Kyle said.