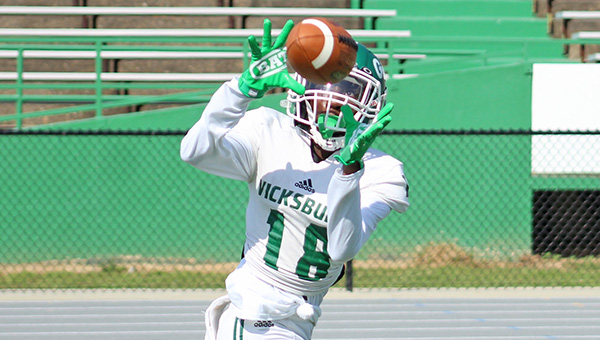 There is a much different vibe at Vicksburg High heading into the 2021 football season, as compared to 2020.

The season will start on time. There will be home games. And, perhaps most importantly, the roster is vastly different. A youth movement that began last year is entering its next phase, with nearly a dozen sophomores in the starting lineup.

The Gators might still be punching up against some of the better opponents on their schedule, but they’re ready to take the next step toward becoming contenders when they open the season Friday against Germantown in the annual Red Carpet Bowl.

“We’re a 5A school but we’re trying to get to an 8A mentality. That’s fine. We’re going to go out there and chop wood and see where the chips fall,” Vicksburg coach Todd McDaniel said. “This is not the same football team from last year. We’re not a group of guys anymore. We’re more family-oriented and we’re going to continue to get better and better.”

Vicksburg will play Germantown at 8 p.m., after Warren Central and Forest Hill play the first game of the Red Carpet Bowl doubleheader at 5:30. Both games are at Vicksburg’s Memorial Stadium.

Tickets for the Warren Central vs. Forest Hill game can be purchased at gofan.co/app/events/327894.

Tickets for the Vicksburg vs. Germantown game can be purchased at gofan.co/app/events/327895.

It’s McDaniel’s second Red Carpet Bowl as Vicksburg’s coach, but the first with all of the usual pomp and circumstance. A very limited number of fans were allowed to attend last year’s game because of the COVID-19 pandemic. The usual doubleheader was also condensed tpiggybacked on the Vicksburg vs. Warren Central rivalry game replaced the original matchups.

It’s also Vicksburg’s first home game since October 2019. All of its home games last year were played at Warren Central because of construction at Memorial Stadium.

“It can’t be any different than last year. Last year was much different. It’s more of the normal now,” McDaniel said.

The Gators’ unofficial 2021 debut came last week in a three-team jamboree. They beat Raymond 14-0 and tied Hazlehurst 0-0 in a pair of two-quarter games that McDaniel said gave him a feel for this roster.

The offense scored twice early against Raymond, and the defense produced a pair of shutouts. Hazlehurst only had four first downs.

“That’s great, because I’ve always been a defensive guy. I don’t care what level it is or whatever the case may be, if you’re able to keep them from moving the ball on a consistent basis that’s a great job,” McDaniel said. “Hopefully this Friday we can continue to build off of that momentum and get better.”

The Gators’ defense will need to be on point against Germantown, which features Mississippi’s top college prospect.

Robinson is the No. 4 running back and No. 46 overall prospect in the 2022 recruiting class according to 247Sports.com.

“He’s going to be a tall order. He’s big, fast and strong. But what I can say about this team is we’re going to be aggressive and we’re going to play sound football and be where we’re supposed to be,” McDaniel said.
The Gators will counter with a young backfield looking to come into its own this season. Sophomore quarterback Ronnie Alexander started all but the first two games last season, while running backs Alex Jefferson, Malik Montgomery, Collin Johnson and Otis James have shown plenty of potential during the offseason.

Jefferson scored on a 69-yard run in last week’s jamboree against Raymond, and Montgomery had a 2-yard run. Johnson and James scored three touchdowns apiece in a spring jamboree in May, against Wingfield and Port Gibson.

“We had a lot of seams in both games Friday, and the backs hit them most of the time. A few times we left some meat on the bone,” McDaniel said. We had all 10th-graders in the backfield, so I just want to see where these guys can go. The sky can be the limit for these guys.”

McDaniel is hoping the ceiling is just as high for the rest of the team. The Gators only won twice last season, but with so many young and talented players in the lineup they have big plans to turn that around.

“I was glad for us to be able to come out and be aggressive, play football and have a good time,” McDaniel said, referring to last week’s jamboree performance. “We won’t see the product I’m looking for until week 7 or Week 8, when we’re hitting on all cylinders and are a really good football team.”