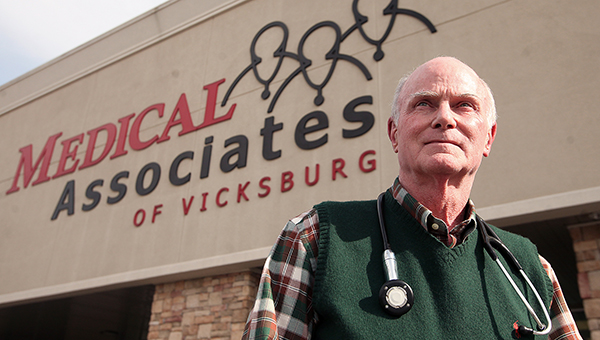 Vicksburg lost a beloved physician and community leader in Dr. Paul Pierce III, who died Monday. He was 80 years old.

Services are at 11 a.m. Saturday at Crawford Street United Methodist Church with visitation starting at 10 a.m. at the church.

“Dr. Pierce was a father figure in my life,” said Dr. Dan Edney, an associate. “He was absolutely not just instrumental, but foundational, in making it happen so we could build the new hospital.

“He has been in the trenches of primary care medicine. He worked every day of his life to care for patients and the community. Even when most physicians would have retired, he was willing to invest in what is now Medical Associates of Vicksburg,” Edney said.

“He’s done far more for Vicksburg than most people know. He’s been a wonderful influence in my life.”

“A lot of people saw the medical side; we got to see the family man side of it something a lot of people didn’t get to see,” said Pierce’s son, cardiologist Dr. Paul Pierce IV. “How loving of a person he was and how caring of a father he was. He put that in his medical practice also but we got to see more the human side of him.”

The younger Pierce said his father was the influence he needed to pursue a medical career.

“I never really did think of anything else I wanted to be than to be a physician and follow in his footsteps,” he said. “He taught us the importance of giving back to the community and practicing medicine in a small town is one of the best ways to do that.”

He said his father practiced medicine until he retired earlier this year after 46 years.

“It’s a desire to help people,” he said. “He didn’t have to practice until he was 80 years old; it was his vocation and his avocation. He enjoyed his work.”

“I didn’t like the idea of sitting behind a desk,” he said in a 2015 Vicksburg Post interview. “The higher up you go, the less actual engineering you do.”

He enrolled at the University of Mississippi Medical Center, graduating in 1972. He did his internship and residency in internal medicine from 1972 to 1975 at UMMC and opened his practice in Vicksburg in 1975.

In the 2015 Post interview, Pierce said he was not a big fan of using computers when he saw a patient and took all his notes during the visit by hand.

“If doctors over-rely on computers, it takes a lot away from the practice of medicine,” he said. “You can tell a lot about patients by talking to them and listening.”

“He didn’t like the computer at all,” said Paula Shaw, who worked as his nurse for 16 years. “In fact, he refused to even have one in his office for a while, but they (the clinic) made him.

“When I was working for him, we didn’t take computers in the room. He’d take notes on paper,” Shaw said.

“The way things wound up being, he was better at it (operating a computer) than he wanted to be,” Pierce’s son Paul said.

“Just because of the way medicine evolved over the past 10 years, it became a necessity and he had to get good at it and he did,” he said. “The hallmarks of medicine are you have to adapt to changes and when they finally went to an electronic medical records system, he was forced to learn.”

Shaw described Pierce as “one of the busiest doctors in Vicksburg and for a while, I was his only nurse so we worked really hard. He was the best doctor that I’ve known. He cared about his patients like nothing I’ve ever seen. He would fight to get what was right done for his patients.

“He worked tirelessly all the time and always told me, ‘I’m never going to retire; I’ll probably die right here. He worked right up to the end.’”

Shaw, who was also one of Pierce’s patients, said he took great care of all his patients. “I don’t care who they were; he was the best doctor.”

She said Pierce “had the tough outer shell but had a huge heart. If somebody was in need, he was the first one to help them, whether financially, emotionally, whatever. He was always there. I can’t say enough good things about him.”

Baleigh Ford, a physician’s assistant for Pierce, said, “Dr. Pierce left a legacy on this town and in my heart. I wonder what kind of PA I would be had he not given me a chance. I am happy to say that I will never have to know that. Because of him, his legacy lives on in me and every other provider and medical staff that he ever encountered.

“I was blessed with one of the greatest opportunities of my life when I was hired to work with Dr. Pierce III right after graduating from PA school. I was one of the youngest in my PA school program because I was lucky enough to be accepted into the program straight from undergrad after finishing with highest honors.”

She said Pierce had high expectations of his staff “that were anything short of excellence. His standard of care concerning his patients surpassed any of all physicians I had ever encountered. He took time to know his patients on a more personal basis.

Pierce, Ford said, was also a generous man. “I remember him multiple times giving patients $100 bills to them for having their 100th birthday,” she said.

“For a physician to be loved by their patients isn’t surprising,” Ford said. “But for a doctor to be truly loved by his staff is rare and speaks volumes of the person he was.

“To say I am heartbroken and his staff is heartbroken is an understatement. He will forever be missed, but his legacy and ‘the’ Dr. Bill Pierce III way of practicing medicine will continue to live on forever,” she said.

Pierce, Mayor George Flaggs Jr. said, “Was a personal friend of mine and a confidant. In 1987, when I decided to run for House of Representatives, he was one of the few people in the profession that he was in that encouraged me to run, and we’ve been in close contact ever since then.”

Flaggs said he believes Pierce was one of the most prominent, progressive people to live in this city.

“He was always encouraged by the progress of this city both medically and from a governing perspective,” the mayor said. “He kept up with the city of Vicksburg. I spoke with him about three weeks ago and it was one of the most encouraging conversations I’ve ever had with anybody. I’ll forever remember Dr. Pierce through his great works and his great deeds.”

Flaggs said the city “will recognize him some kind of way in some big way” and issue a proclamation honoring Pierce.

“He was a giant of a man and a pillar in this community both in the medical world and the civilian world,” Flaggs said.

Merit Health River Region staff and doctors fondly remember Pierce for his contributions to the Vicksburg and Warren County community.

“Dr. Pierce was a pillar of the Vicksburg medical community for over 45 years and countless individuals and families had the distinct pleasure and fortune of having him as their trusted physician. Dr. Pierce’s dedication to River Region and his patients was exemplary and he was a consummate professional whose opinion you held in the highest of regard. Dr. Pierce will be unquestionably and dearly missed as Drs. Paul and Sam Pierce continue his distinguished legacy of caring for and treating the greater Vicksburg community.”

“Dr. Pierce talked me into moving to Vicksburg 35 years ago,” said orthopedic surgeon Dr. William Porter. “We have been friends ever since. He was the hardest working physician that I’ve ever known. His work ethic was passed down to his sons. I have always admired Dr. Pierce and feel honored to have taken care of thousands of his patients. The family has my deepest sympathy.”

“Bill Pierce has been a good friend and colleague to me since my arrival to Vicksburg in 1996,” said Dr. Eugene Ferris, a general surgeon. “He always gave me great support both professionally and otherwise over the years. He was my primary care physician.

“Bill was born and raised in Vicksburg and practiced internal medicine here all his life,” Ferris said. “He was very proud of his community and treated all of his patients with deep passion, love, and respect as though they were his own family. He also expected the same from others working with him. He has certainly passed those traits down to his extraordinary sons and spouses — Paul and Jill, Sam and Kelly and his grandchildren (Jake, Will, Mary Jane, Clay, Luke and Sam). Bill’s wife, Pat, has always been the most important person in his life, both in raising their family and guiding professional support. He always made it clear to everyone that he ‘married up.’

“Bill was blessed because he was very good at what he did and enjoyed it. He will be desperately missed.”