Looking Back: Hook and Ladder Station No. 6 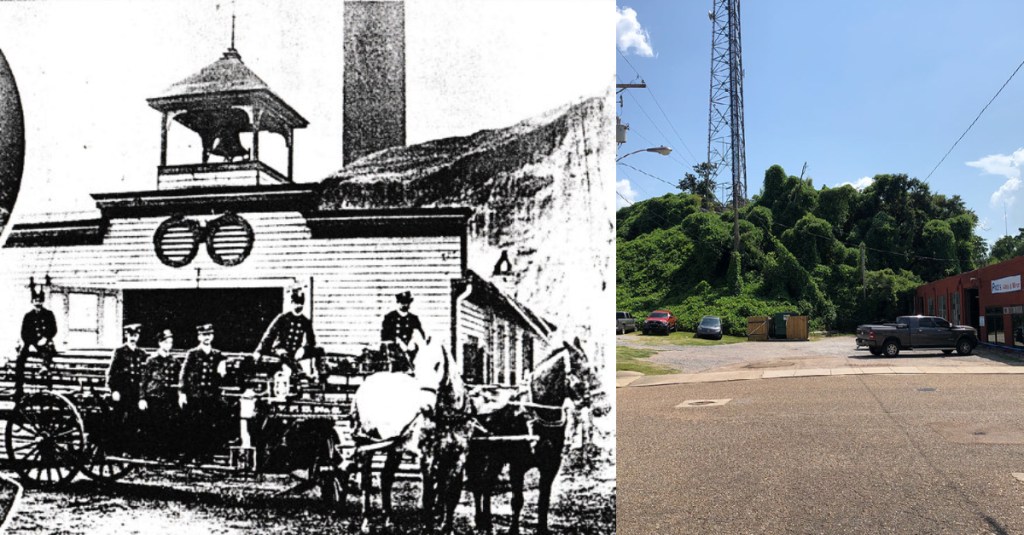 In 1902, Hook and Ladder Station No. 6 stood on Walnut Street. Today, the site of the station is a vacant lot. (Photos submitted)

In September 1902, the fire department and city leaders began discussions about where new fire stations were needed.

It was decided that a new hook and ladder station would be built in the middle of Walnut Street just to the south of Madison Street, near what was then the Walnut Street School. One can see in the photo that it is today an empty lot to the east of Price’s Glass, at the base of Castle Hill.

In the historic photograph, you can see the standpipe on the top of the hill, as well as the exposed earth behind the station. In October 1902, The Vicksburg American reported that “Mayor Trowbridge received a letter from the Seagrave Company at Columbus, Ohio, stating that the new hook and ladder and fire hose reel for this city were shipped on the 14th instant. The hook and ladder will be stationed at the new house to be built at the corner of Walnut and Madison streets.”

The purchase of new fire vehicles has always been a celebratory event in Vicksburg. On Oct. 31 of that year, the American reported that the hook and ladder had finally arrived at the freight depot and that the assistant fire chief would take charge of it and have it taken to Constitution Firehouse until No. 6 station was complete. The Vicksburg Herald reported that the hook and ladder truck “is a beauty, though apparently a little heavy, but it may be only apparently as the team walked up the hill pretty well with the machine. The truck was greatly admired as it passed up Washington Street on its way to the temporary quarters at Constitution engine house.”

The following day the Herald reported that “All was joy and gratification in the Vicksburg fire department yesterday caused by the additional apparatus which has just been received. Early yesterday morning Mr. Ed Hayes and his assistants at Constitution engine house got out the hook and ladder truck which had been installed there, for a little practice.

“They selected their own building as a good one on which to try ladder raising, and the truck was accordingly pulled out into the street. The 50-foot extension ladder was run out and for the space of an hour, the boys practiced with it, finding it rather awkward at first. After a very short while, however, they got the ladder raised from a horizontal to a perpendicular position in the snap of a finger, the heel resting on the pavement below and the upper end on the cupola, which is 50 feet above.

“As to the truck itself, it is a beauty, is thoroughly turned out and equipped and will be a great addition to the firefighting apparatus. It contains six nests of ladders, from 15 to 50 feet, strongly built, and all on the extension plan. The truck carries with it as part of its equipment, from Babcock’s eight house hooks or roof hooks, door openers, roof cutters, combination picks and axes, ropes, torches, shovels, pitchforks. The entire apparatus is beautifully decorated and painted, and furthermore is light and easy to transport, and the impression is general that the Seagrave Company have turned out a dandy.”

In November, Frank Barber, president of the Vicksburg Baseball Association, journeyed to St. Louis, where he “bought a span of fine horses to draw the new hook and ladder wagon.” On Nov. 4, the city opened bids and awarded the construction of the new firehouse to L. Ledbetter for $1,154. The firemen continued to practice with their new equipment throughout November, at one point taking the hook and ladder wagon to the Carroll Hotel on Clay Street, practicing on the west façade. The new firehouse was completed on Feb. 28 at which time the Vicksburg Herald reported that “the house itself is a very neat, serviceable affair and while brick would have been better with a view to permagency (sic), the structure is it seems compact, durable and serviceable, with no superfluous space, yet room for everything, for the apparatus, for feed, harness and accommodations for both the four-footed and bifurcated attendants. Surmounting the gable end of the roof facing north has been placed a little belfry within which will be placed the bell donated to Capt. Hosseley and his comrades of the company by Capt. Powers, which formerly did duty on the bonnie Annie Laurie. Altogether the house is neat and tidy and will no doubt suit the purpose for which intended.”

A couple of days later, the Herald reported that “the new fire station at the end of Walnut Street now holds the hook and ladder truck and incidentally Dennis Hossley, Dan Johnson, Joe Genella and the truck team. In consequence of this transfer, which was effected yesterday morning early, things around Constitution engine house and “Jackson road” generally were abnormally quiet yesterday, and as Chief Ed Hayes of Constitution remarked, the old house seems deserted sure enough.

“At the same time there is a deal more of room for the Constitution steamer and the old reliable Constitution reel, and for this much Engineer Andy O’Connor and Driver Hayes are thankful. But all the same, they admit a certain feeling of lonesomeness without ‘Capt. Dennis,’ who has been the life of Constitution Hall.”

In September 1920, the city advertised for bids to demolish the firehouse.  The lot remains empty today.