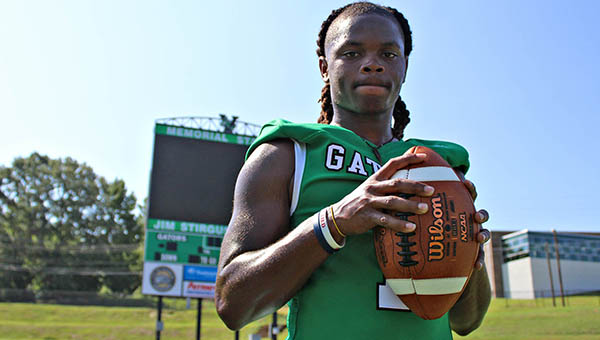 The freshman stepped in as the starter in Week 2 and played well, but was mostly a game manager. He only passed a few times per game, on average, and his running attempts were often in short yardage or goal line situations.

The idea was to slow the game down, let the young quarterback learn a bit, and ensure he didn’t need to make a ton of plays to be effective.

This season, the training wheels have been taken off and thrown in the trash. Now a sophomore, Alexander will have more freedom and responsibility in the Gators’ offense, more chances to make plays and, he hopes, a lot more fun as the program tries to turn a corner after a string of down seasons.

“Great decisions, great accuracy. We’re putting some things in place for him to be able to use his talents a little bit more, to use his athletic ability,” McDaniel said. “I can’t wait for him to start to mature. He’s not going to do anything but get better year after year.”

Alexander led Vicksburg to the Little Six Conference championship as an eighth-grader, and it seemed clear at that point that he was the program’s quarterback of the future. The future, though, arrived much sooner than expected.

Returning starter Sha’Kori Regan injured his hand late in the 2020 preseason and missed the first two games. The Gators started the season with back-to-back shutout losses as wide receiver Laurence Sullivan tried to fill in but struggled. When Regan returned in a Week 2 road game at Biloxi, McDaniel decided to make a lineup change. He moved Regan to running back and put the freshman Alexander under center.

Regan responded with a 1,000-yard rushing season while Alexander’s job was mainly to hand the ball to him.

“I put the training wheels on him. I wouldn’t let him do certain things,” McDaniel said of Alexander.

That changed for the Gators’ playoff game against Grenada. McDaniel opened up the playbook a bit to showcase Alexander’s ability — as well as provide another weapon to a lineup ravaged by a COVID-19 outbreak; nine starters missed the playoff game either because of a positive COVID test or the subsequent contact tracing — and the freshman responded with a solid game. He threw for one touchdown and ran for another in a hard-fought 31-14 loss.

“I told him for the Grenada game I was going to let him loose and I think he threw for two touchdowns, ran for about 70 yards and orchestrated the game. In the second half, if not for a few calls we might could have stolen one,” McDaniel said.

This offseason, Alexander has fully cast the training wheels aside and started pedaling down the street. He has looked impressive throwing the ball in summer workouts, and completed his only attempt in the spring jamboree against Wingfield and Port Gibson.

McDaniel wasn’t reining in Alexander during the jamboree, he just didn’t need to let him do too much. Running backs Collin Johnson and Otis James combined to run for six touchdowns in the two games, and the Gators had 211 rushing yards in two quarters in a 30-8 win over Port Gibson.

“Ronnie can actually get it vertical now. He looks like he’s got a string on the football. So we’re going to use his talent,” McDaniel said. “We’ve got some guys that can get down the field and we’re going to force these teams to put two safeties on the hash.”

Alexander said he’s gained a lot of confidence in his ability to throw the ball down the field. His only completion in the spring jamboree went for 39 yards to running back Malik Montgomery and set up a short touchdown run by Johnson.

“I feel a little better with my touches and throwing and all that,” Alexander said.

Although his passing has improved, Alexander’s eyes lit up when talking about his potential role in Vicksburg’s running game.

The Gators have a talented stable of backs — Johnson and James scored three touchdowns apiece in the jamboree, and Johnson had 132 yards on nine carries against Wingfield — but Alexander will also have a part to play.

Alexander scored five rushing touchdowns in 2020, and he said McDaniel has put in a number of plays and packages designed to use his mobility in both the running and passing game.

“He’s making me run a lot on sprint outs and throwing the ball a lot,” Alexander said, before adding with a big smile a moment later, “I’m going to be toting that ball.”

The Gators are putting a lot on Alexander’s shoulders this season. He still is only a sophomore, but will be in a leadership position as the quarterback and responsible for a lot of the team’s offensive success or struggles. He said he’s ready to handle it all.

“It’s way more responsibility,” he said. “It makes me a little bit nervous, but, you know.”