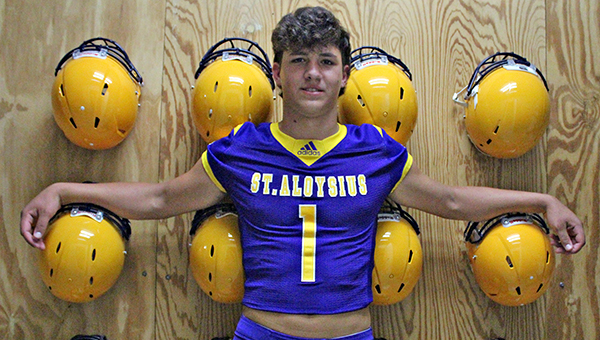 Chase Tucker started to emerge as a defensive playmaker for St. Aloysius late in the 2020 season. He finished with a modest 48 tackles and three sacks, made The Vicksburg Post’s All-County team as a linebacker, and then turned his attention to next year.

In the six months or so that followed, something funny happened — Tucker grew.

“Genetics. It finally caught up with him,” St. Al head coach Bubba Nettles said with a laugh. “He hit a growth spurt in the offseason that I did not see coming.”

Tucker exploded from a decent-sized 180 pounds to a 215-pound monster in one offseason. His dedication in the weight room and ripped physique earned him new nicknames like “The Hulk” and “Living Legend” from joking teammates, as well as some attention from college coaches.

“He has packed on about 35 pounds of muscle,” Nettles said. “He’s hit the weights like he’s supposed to. He’s done everything I’ve asked him to do exactly like it needs to be done, and he has muscled up. He looks great.”

Tucker is more than just a freakishly athletic sideshow. He is the linchpin of St. Al’s defensive scheme, and one of its most physically gifted players. In addition to his tackle total, he led the team in receiving in 2020 with 14 catches for 196 yards.

Seeing his own potential, he said he dedicated himself to getting bigger and stronger in the weight room this spring. Just how big and strong he got, though, surprised even him.

His teammates have been equally impressed. Quarterback Tristan Wilbanks, who Nettles said put in his own share of quality offseason work, said Tucker’s weight room prowess did not go unnoticed.

“He’s huge. He’s got great things ahead of him. I’m glad he’s on my side of the line,” Wilbanks said. “He’s always hitting it hard in the weight room and it’s shown. In the last year he’s gotten huge.”

Besides hitting the weights, Tucker has been making the rounds. Nettles said the 6-foot-3 senior visited a number of college camps this spring and summer, and started to gain some attention from Mississippi’s junior colleges and smaller four-year universities.

No colleges have offered scholarships yet, but Nettles believes it’s only a matter of time if Tucker can produce on the field like he did off of it.

“He’s done the whole camp circuit this summer and I’ve got schools saying, ‘Talk to me about his family.’ When those schools start asking about the family, they’re thinking heavily or about to pull the trigger on an offer,” Nettles said. “If he starts off the way he finished (2020), then by the time he finishes this year it’ll be one for the ages.”

Tucker said the thought of earning a chance to play college football is driving him this season. St. Al plays its opener Aug. 20 at Park Place Christian Academy.

“That’s been my goal ever since I started,” Tucker said. “I want to be the best football player I can. Get as many offers as I can, and have a choice of what college I want to go to.”