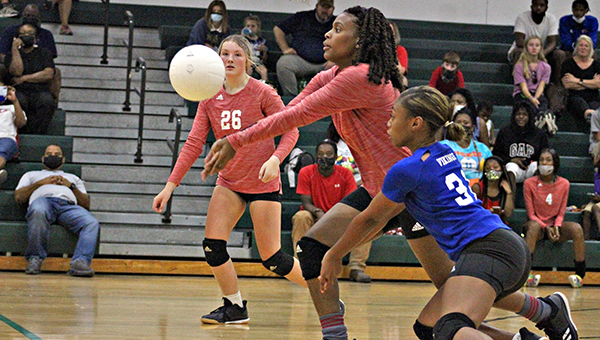 After a shaky start to the season, Warren Central’s volleyball team needed a win to start gaining some traction.

It found the one opponent it can always seem to count on to help.

It was only the second win in six matches for Warren Central this season, but its 22nd consecutive victory against Vicksburg (4-2). Warren Central has never lost to its crosstown rival since both programs were started in 2011.

“It gets harder every time. They get better every time. They’ve got a great group of girls and fight hard,” Warren Central coach Matt Gullett said of Vicksburg. “We’ve had some rough ones. We came out tonight and, I thought, played some much better ball in the first and second set. We distributed the ball to a lot of hitters on the front row, and being able to do that you’re giving attacks from all directions. We tried to make them move around on the court. The more we were able to make them move, the more we were able to find holes.”

It was a disappointing loss on several levels for the Missy Gators. They had picked up a big region win against Florence two days earlier and seemed poised to finally challenge Warren Central — they’ve only won three games in their 22 matches against the Lady Vikes — but came out flat.

After a back-and-forth start to the first game, Warren Central won nine of the last 12 points to win 25-14, and then dominated the second in winning 25-13.

“This is not the team you saw Tuesday night. We’re not moving, we’re not communicating, we’re not consistent with our hits or anything. I don’t know where they were tonight,” Vicksburg coach Deborah Brown said. “We were more than flat. We were never in the games. It was like we just said, ‘Oh well, the game is here.’”

Brown shuffled her lineup for the third game by inserting several freshmen, and they did provide a spark. After falling behind 13-7, Kennedy Mullins served for nine consecutive points to help the Missy Gators pull ahead.

They still led 20-15 after the run had ended, but couldn’t close out the game and stay alive in the match. Warren Central won the last three points after facing game point and took it 26-24.

Serenity Motngomery served the last three points. On match point, she also made a nice save on a sinking return shot before a VHS mishit ended the match.

“I was really proud of that because they fought back to get it. We’ve had trouble digging ourselves out of holes so far, so that was a good thing to be able to do,” Gullett said.