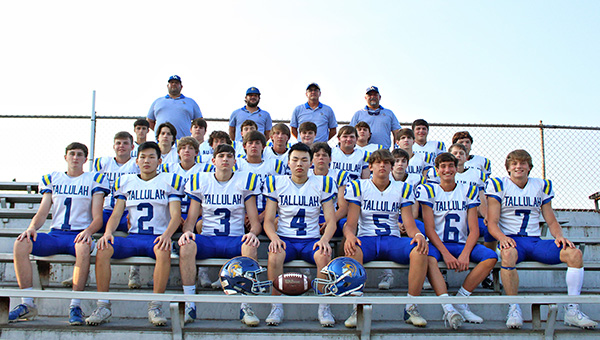 As Tallulah Academy’s football players marched through the line on picture day, something seemed a bit off.

Familiar numbers of longtime starters like 1, 20 and 52 had been passed down to eighth- and ninth-graders. Others who had been in the background the past couple of years were now front and center with the starters and upperclassmen.

It’s clearly a year of transition for the Trojans, but it’s nothing they haven’t seen — and persevered through — before. Tallulah has won three state titles and played for two others since moving to the MAIS’ 8-man division in 2014, and the expectation that they’ll get there again remains no matter who is in the lineup.

“Every year, I think it’s the mindset for Tallulah Academy. It’s just a high standard to get there every year, and we usually end up getting there at the end of the season,” senior running back Paul Michael Machen said. “To not make it there is definitely a disappointment. We’ve got a bunch of young guys, but I think they’ll step up and we’ll prove a point. Hopefully we won’t let anybody down.”

Tallulah finished as the MAIS Class 1A runner-up last season — it lost 46-34 to Briarfield Academy in the championship game — but will have a much tougher task than usual this season of staying at the top. Briarfield won a Week 1 rematch with the Trojans, 22-14.

The Trojans lost seven seniors, including two 1,000-yard rushers (twin brothers Carter and Walker Sullivan) and four starting linemen. Junior quarterback Dee Morgan is back for a second season as the starter, and Machen will play a much bigger role after serving as the No. 3 back last season.

Head coach Bart Wood said Machen has embraced his new role as not only the featured back in the offense, but a leader in the locker room. Of the seven seniors on the roster, he’s one of the few with significant game experience.

“As soon as practice started, Paul Michael took it. I was tickled at that. Sometimes you go through a season and never find that guy,” Wood said.

Machen said he saw the need for a locker room leader in his class early on, and has tried to prepare himself to take on the job for a while.

“There was nobody else that would fit the place as best as I would. The past couple of years I’ve worked myself up to it, and I think me being that was the best fit,” Machen said.

Morgan, meanwhile, passed for 1,052 yards and 17 touchdowns, and added 231 rushing yards and five TDs in 2020. Wood said he tried not to put too much on Morgan last season, and instead relied on the Sullivan twins to carry the offense. That’s changing this year.

“I’m expecting big things from (Morgan). Last year he didn’t have to be the stud, and this year it’s time for him to step up,” Wood said. “I told him last year to let the older kids handle it and you develop, and he did.”

Beyond their two key offensive playmakers, the Trojans are trying to replace departed veterans with talented but young players. Kody Vickery, a 250-pound junior, will try to fill the big hole left by four departed seniors on the line.

Four offensive and five defensive starters do return, but how quickly the other half of the lineup develops could shape the Trojans’ season.

“We’re replacing a lot — four of our big offensive and defensive linemen and then our two main backs. That junior class is a big class and they’ve got a lot of talent,” Wood said. “We’re going to be a little bit younger, a little inexperienced, but we’ve got the talent. We’ve got to develop them. Quickly.”

Wood added that one thing the Trojans do have is depth. There are 26 players on the varsity roster, a healthy number for an 8-man program, and a few more ninth-graders who will contribute while splitting time between varsity and junior high.

Wood will rely on that, he said, to gain an edge against many opponents.

“We have so many athletes we can almost play them one way. We’re going to try to wear people out and be fresh,” he said. “We’ve got a whole bunch of people that can play, but we don’t have a whole lot of stars.”

They also have a strong tradition and a mindset that nothing but the best is good enough. Since the MAIS started its 8-man division in 2009, only Briarfield has won as many championships as Tallulah has. No team has gotten to the championship game more often.

If all else fails, the Trojans said, there’s simply a confidence built into the team’s DNA that they’ll be among the teams standing at the end.

“It’s a work ethic, and these boys love football. They like to play football and they like to play baseball, and that’s what they like to do,” Wood said. “And Tallulah has a tradition of football. It’s what’s been here forever. Their dads played here, and their granddaddies played. It’s just what we do.”