Playmakers 2021: Football is ‘everything’ for WC receiver Trey Hall 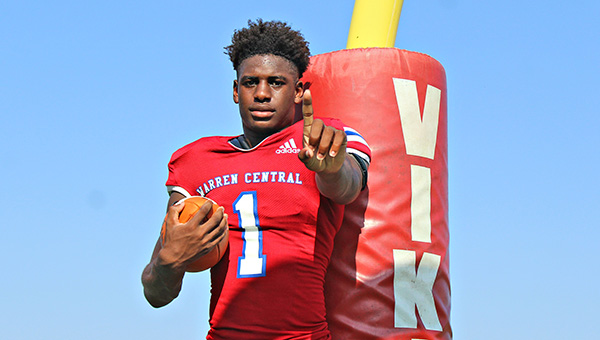 Growing up, Treyvon Hall always knew he was going to be a football player. It was what his family did. His older brother played for Warren Central when he was in high school, and Hall knew he would follow in his footsteps.

Now a junior receiver and running back at Warren Central, Hall said he is still competing with his 23-year-old brother. They play football together just as they did as kids starting when Hall was 6 years old.

Unlike when he was 6, Hall is bigger, faster and stronger, and it shows when he takes the field. Last year, he scored six touchdowns as a sophomore and averaged 15 yards per catch and 8.7 per rushing attempt. This year, he has bigger plans as he becomes an upperclassman and steps into a leadership role.

“(Last season) was good, but I know it could have been better,” Hall said. “I’m going to be better this year. I want 20 touchdowns or more, but that is my goal.”

Hall said football is everything to him, and is always his main focus. He is a one-sport athlete and spends the offseason preparing for the next year.

“I would choose (football) over anything,” Hall said.

Warren Central’s quarterback doesn’t just interact with Hall on the field. They are teammates, friends, and offseason training partners.

Hartley Sullivan, a senior, said he has waited his turn for two years to be the starting quarterback. This year he has claimed his spot and is ready to make it count. Sullivan and Hall push each other to get better every day to make this season one to remember.

“Trey and I have a great chemistry,” Sullivan said. “We are always together. We are always working on things, we are correcting our mistakes, and we are always thinking about what’s next.”
Hall said his team is his family and they are the ones that motivate him — especially Sullivan.

“We motivate each other,” Hall said. “We’ve got to be great — in the weight room and on the field. We push each other to be great.”

Sullivan said Hall is a great teammate, and the two of them believe they make a great team pushing each other to greater heights.

Warren Central head coach Josh Morgan said the relationship between Sullivan and Hall is what you want with a quarterback and his receiver. He said it doesn’t take his players long to figure out who they can trust to throw the ball to and who will make something happen if given the chance.

“If you’re a quarterback you know who you trust with the ball and who you can count on,” Morgan said. “There’s a trust thing there, and I think that is something that Trey has earned. It’s not something you’re just given, and he’s earned that right.”

Morgan said Hall has already been a leader through his actions. He’s considered an accountable, trustworthy and mature player in the locker room and Morgan said that is considered leading by example.

“We are always talking about going into that next step —- continuing to grow and setting a higher standard and then taking on more roles, and that will definitely be on his plate,” Morgan said. “He’s done a good job with that.”