Playmakers 2021: Versatile playmaker Willie Rogers will do it all for PCA 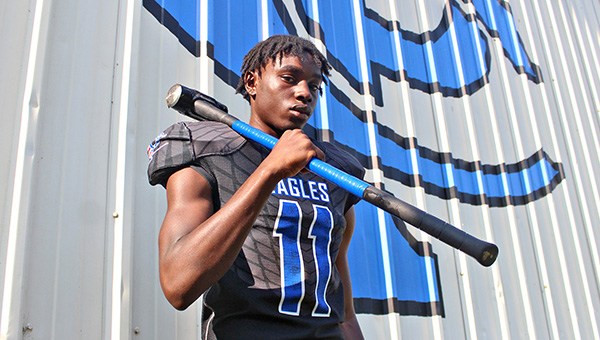 Willie Rogers is set to have a comeback season as an essential part of Porters Chapel Academy’s football team after sustaining a knee injury last year.

The senior transferred from Warren Central in the summer of 2020. During that summer, he injured his knee while on a trampoline with friends. However, he was told he was cleared for the football season and even played well. He had eight tackles in the season opener against Benton Academy.

Then part of the way through the third game, Rogers re-injured his knee to the point he was forced to sit out the rest of the season with a torn meniscus.

“I went through physical therapy and it was really tough on my mindset, but I think it helped me overall,” Rogers said.

Rogers said it was tough to sit on the sideline because he wanted to play with the team that had been so welcoming to him when he transferred.

“I felt like it was more of a family here,” Rogers said. “I felt more welcome here.”

PCA coach Blake Purvis said that, despite the injury, Rogers still showed up to practice and helped the team on the sidelines. He did a lot of grunt work like setting up equipment for drills, and wherever else he could help.

“He just stepped in with whatever he could do for the team, and that’s what he did even though he couldn’t be on the field,” Purvis said. “It was a model of what you want if somebody does have to get hurt.”

Purvis said this contribution to the team without even being on the field has helped Rogers step into a leadership role this year. Even earlier than that, his constant presence and encouragement started developing him into a team leader last year.

Rogers said his team still made him feel like he was a part of the action while he was hurt, and they supported him during that difficult time.

“They were still by my side,” Rogers said. “They were telling me what happened at practice when I was at physical therapy. It was really great.”

This year, Purvis said Rogers is more than ready to take the field. Not only is Rogers resuming his main role as a receiver, he will see time as a quarterback, linebacker, running back and defensive back. He caught three passes for 100 yards and two touchdowns in a 48-0 win over Kemper Academy last week, to go along with five tackles, one forced fumble and a fumble recovery on defense.

“We are putting a lot of stock on Willie this year and he’s ready for it,” Purvis said. “The benefits of him on our team are endless.”

Purvis said Rogers won’t just catch the balls in the end zone, but will be a triple threat with his throwing and running ability.

“He should score a lot of touchdowns for sure,” Purvis said. “Obviously on the field statistically he should be a huge leader for us in that regard. But more than that, his leadership on the field leads our offense and our defense as he’s going to play on both sides of the ball.”

Although it is a lot of work to learn all the positions he will play, Rogers has fun with it all.

“It boosts my spirit knowing that (Purvis) trusts me that much,” Rogers said. “It’s fun to me, though.”

Purvis said Rogers has an extra drive that pushes him to not settle for being above average naturally at these positions, but to be the best in any position he is in.

“He doesn’t just want to go through the motions,” Purvis said. ”He’s willing to put in the work. He wants to be as good at quarterback as he is at receiver whether he plays it one snap a game or 20. To me, that says a lot.”

Purvis said through all the work, Rogers shows up with a smile every day. He said Rogers is a very gifted athlete and an exceptional leader, as well as a great person.

“He is golden,” Purvis said. “I think anybody you talk to — teachers, our administration, his teammates — I don’t think you’ll hear anything different. He’s loved by everybody.”

Rogers said his goal for this season is to lead the team in receiving and to win the state championship. How will he do that? Rogers said by working hard and not getting on another trampoline.

“(Football is) my favorite thing to do, to be honest,” Rogers said. “It’s everything.”