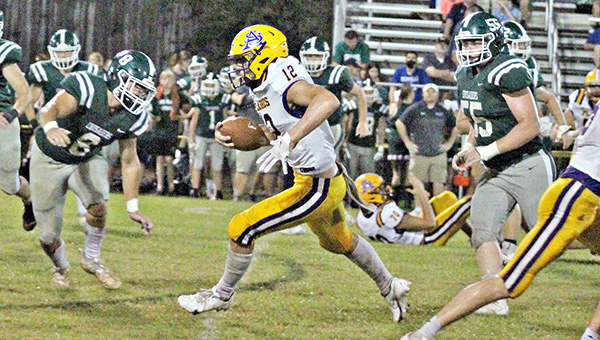 When they started working on the game plan for Week 2, the first thing the St. Aloysius Flashes looked at was the start of Week 1.

Two kickoff return touchdowns in the opening minute were not the only reason they lost 40-26 to Park Place, but they were the most glaring mistakes among many. Sunday’s film review and the first portion of practice Monday were dedicated to correcting it.

“It was very somber in here, because they knew they gave one away Friday. I honestly believe that,” St. Al coach Bubba Nettles said. “I think if we were to play them again this Friday, having fixed everything, it would be a much better football game than it was. And they know that, and it bothers them pretty bad.”

The Flashes don’t get to play Park Place again, however. The next opponent is Centreville Academy, which presents a 180-degree turn from Week 1 to Week 2.

Park Place quarterback Bryson Shupe completed 9 of 17 passes for 151 yards and two touchdowns. Centreville only threw seven passes and ran it 51 times for 352 yards in a 36-16 victory over Bowling Green.

Nettles said the difference in styles caused him to press pause on correcting some of the mistakes his defense made against Park Place.

“Last week was spread, empty, wide open, let’s throw the football. This week, they could play the entire game inside of this room right here,” Nettles said while sitting in the coaches’ office in St. Al’s fieldhouse. “They’re double tight end, double Wing-T. You want to fix whatever mistakes we made in the passing game, but at the same time you have to prep for 95 percent of them running the football. So do we need to waste time defending the spread when we’re not going to remotely see it?”

Most of this week’s corrections, then, focused on special teams and offense. The Flashes offset the two kickoff return touchdowns they gave up. Adam Francisco returned one kickoff for a touchdown and another 57 yards to set up a touchdown, and a blocked punt by Jacob Brister led to a third score.

In all, St. Al had 80 yards worth of penalties.

“There were a lot of positives. We moved the ball pretty well, we just shot ourselves in the foot. We aren’t to that level where we can do that,” Nettles said. “After the game was over, they were upset that they lost but they had not lost hope. It was more of, ‘That one was ours and we let it get away.’”

Coming into the week, another issue for the Flashes is health and depth. Nine of the team’s 37 varsity players missed Monday’s practice because of either injuries, illness or excused absences.

Nettles said none of the missing players had COVID concerns, but other illnesses were present.

“Everybody’s worried about COVID, but we’re hit right now with stomach bugs, the flu and everything else. We lost a kid to mono. Injuries would be one thing, but this is beyond anything I’ve ever seen. Common day stuff is running through us. We’re looking heavily at ninth-graders (in practice) today,” Nettles said.

Nettles added that there could be a silver lining to the situation. With so many starters out, it’s providing valuable practice reps for their backups.

“I’d rather deal with it now, because that way at least they can start getting reps so when we roll into conference play they’ll be ready,” Nettles said.