Outlook: Teacher and former student reunite in Vicksburg after 43 years 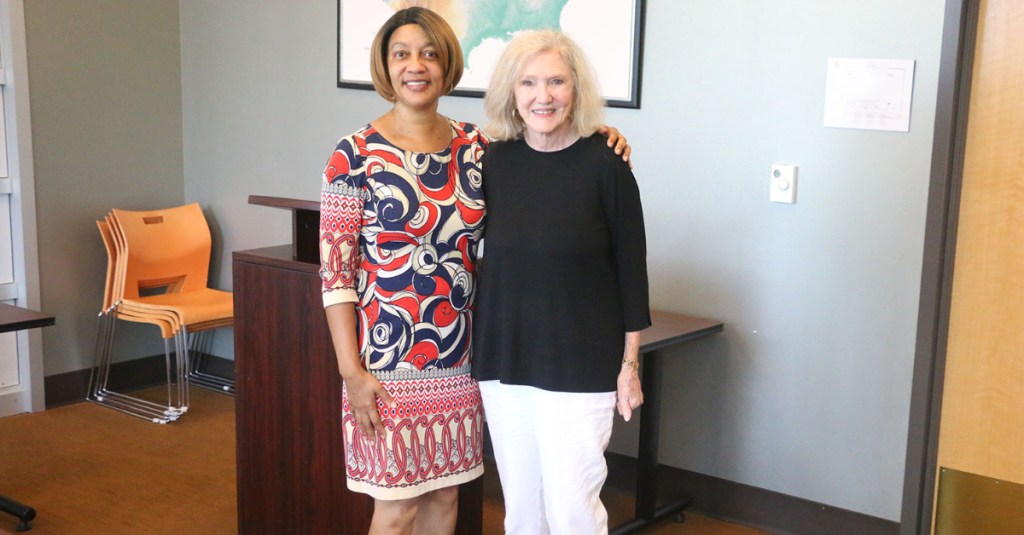 Janice Allen Flowers, left, reunited with teacher Hazel Milner after more than 40 years. Flowers credits Milner with inspiring her to achieve a successful career with the federal government. (Photo by Terri Cowart Frazier)

Teachers may never know the positive impact they make on a student.

Maybe it was a listening ear that had an effect or a kind word that was said to instill confidence. It could have been the encouragement and the belief they conveyed that made an impression.

For Janice Allen Flowers, it was the advice given by her teacher, Hazel Milner.

Milner was a teacher at the Vicksburg Campus of Hinds Community College, where Flowers was taking a Vocational Office Training (VOT) class while she was a junior in high school in 1978.

The VOT class required students to have on-the-job training, and Flowers was placed in a position in the environmental lab at the U.S. Army Engineer Research and Development Center.

“In classes, Mrs. (Milner) would say ‘When you finish your job make sure you ask everybody in the office for more work. Don’t just sit there and do nothing,” Flowers said.

It was this advice from Milner, Flowers said, that turned this first job, be it a requirement for the VOT class, into a more than 42-year career with the U.S. Government while also reaching a GS-12 status – the pay scale for federal employees.

“My duties were to do a little filing and get the mail and when I finished, I would go to my supervisors and would ask if I could help with this or could I help with that so I could stay busy,” Flowers said.

She even volunteered for a job that filled a void.

“My office was over timekeeping, which was a GS-3 position, and we couldn’t keep a timekeeper in that position, so I volunteered,” Flowers said.

Volunteering for the extra responsibilities and working hard did not go unnoticed.

Even when Flowers got pregnant her senior year of high school, it did not keep her from getting a more permanent job with ERDC.

“I did graduate from high school because I didn’t have my baby until September, but when September came, I was not able to enroll in college,” she said.

This was problematic because to maintain her position at ERDC she needed to be a student.

But because she applied the advice given by Milner, Flowers was able to stay.

However, when personnel pulled Flowers’ records, Booth was told she could not hire her.

Flowers was not employed by ERDC since she had come in as a student. Therefore, Booth was told she could not hire her.

In fact, Flowers said, Booth was even told she needed to let her go home that day.

“She (Booth) said, ‘I am not going to send her home today. I am going to give her two weeks and by that time, you guys need to have her hired permanently,'” Flowers said.

By the end of September, and just a week after Flowers’ baby was born, she got the call that she had been hired.

Flowers said she was thankful for Booth’s persistence.

“This was my answered prayer because I didn’t want to go on food stamps or welfare or none of those things,” she said.

Flowers was hired as a GS-1 and in just six short months was promoted to a GS-2.

“After a year of being a GS-2, I did get a (GS-3),” Flowers said, doing the job she had been doing when she first volunteered as a student.

With Flowers’ tenacity to work hard and her persistence to volunteer to help with projects so she could continue learning, she continued to increase her GS status.

Flowers had always hoped to become a GS-7 and when she did, she set her goal on becoming a GS-9.

“And when I got nine, I set it at an 11. I never dreamed I would become a 12, but because I was already doing the work in the office I was in, I was offered a job,” she said.

The job, however, came while she was on a deployment in the New York District.

Flowers said she really wanted to come back home and be with her family.

So she did. Upon returning back to Vicksburg, another prayer was answered for Flowers.

One of the supervisors in her department had taken another job, leaving a GS-12 position vacant.

Flowers was offered the position and now, after 42 years of service, she retired this past January.

“I loved my job, and I loved my people,” Flowers said. “And I thank God for Mrs. (Milner) because she really did motivate us and encourage us.”

Flowers said she had tried to find Milner, and from a chance meeting this past week with Jane Flowers, a teacher who taught at HCC with Milner, student and teacher had a chance to reconnect on Thursday.

“I always talked about her (Milner) and tell people about her because I was so grateful for what she had given us,” Flowers said.