PCA gets its shot at the champ 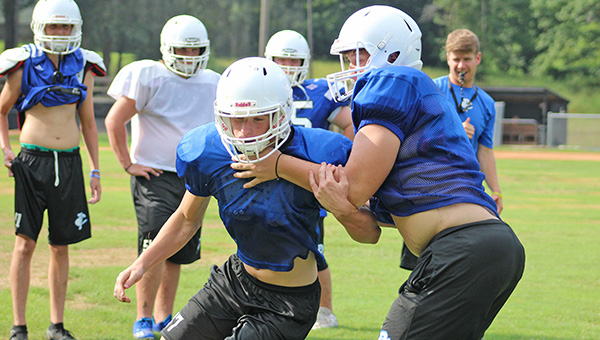 Fresh off a resounding victory in its opener, PCA will go on the road Friday to face two-time defending MAIS Class 2A champion Manchester Academy. Manchester has won 25 games in a row and emerged as one of the top 8-man football programs in the MAIS. Its only loss in the past three years was in the 2018 8-man championship game.

“Manchester isn’t 38-1 in three years in 8-man because they’re not any good. They’ve got a program there,” PCA coach Blake Purvis said. “It’s a good measuring stick for us, and a good early-season contest. We have to have a great week of preparation and we’re going to have to play a good game, and a clean game, and cut the mistakes and be physical, because they’re going to be physical.”

Manchester lost nearly a dozen starters from last year’s championship team, but they haven’t lost a step yet. The Mavericks shut out Ben’s Ford 20-0 in their opener last week.

Ending Manchester’s winning streak will be a difficult task, Purvis said, but it’s also something that could propel his team to another level and make a statement that they are a contender. PCA is in its first season in the MAIS’ 8-man division.

“Just validating where you are, and where we think we’re at. Beating a good, formidable opponent gives you confidence to play with anybody you face all year long,” Purvis said. “They’re 38-1 in three years. You have success against these guys and you feel good about anybody you walk on the field with.”

The Eagles are entering this week’s showdown with a ton of confidence, after crushing Kemper Academy 48-0 last week.

PCA scored in all three phases of the game. John Wyatt Massey had an interception return and Jase Jung a punt return for touchdowns, while Willie Rogers and Tyler Washington scored two offensive touchdowns apiece. The defense forced three turnovers and held Kemper to minus-3 yards of total offense.

“We did what we wanted to do. We showed a lot of depth and was able to still be successful with that,” Purvis said. “Doing that in Week 1, we showed a lot of improvement from the scrimmages, which I had expected to do. And then getting the guys some confidence moving into the season I think was a good first week.”

Turning in a similar performance for a second week, he added, will be the key to improving to 2-0 for the first time sine 2013.

“Any time you dominate the line of scrimmage and win the turnover battle, you should win the game. So I’m very pleased with the defensive side of the ball. They probably made the biggest step from the preseason scrimmages to last week’s game,” Purvis said. “If we continue to play defense like that, we’re going to be in good shape.”