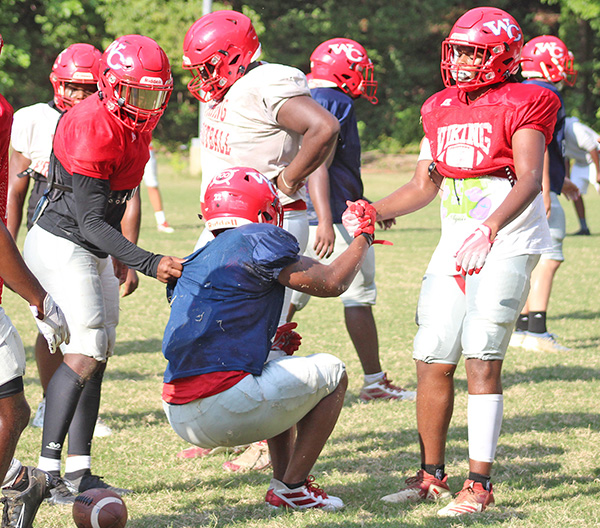 Warren Central linebacker Brandon January, right, and another teammate help running back Darius Carter to his feet at the end of a play during Monday's practice. (Ernest Bowker/The Vicksburg Post)

For most teams in Mississippi, Week 1 is as much about learning about their own capabilities as their opponent. For Warren Central, there really was no other option.

The Vikings will begin the 2021 season Friday at 5:30 p.m., when they take on Forest Hill in the opening game of the Red Carpet Bowl doubleheader. It is Forest Hill’s first game since the 2019 season, since it did not play in 2020 because of the COVID-19 pandemic.

Preparing to play a team two years removed from its last game is a unique challenge, Vikings coach Josh Morgan said. There is no recent film to study, and no good way to gauge their talent. Morgan said it puts more responsibility on his own young roster to execute plays.

“It’s a little frustrating, because we as coaches want to do all we can to put our team in a place where they can be successful. It takes some of it out of our hands, as far as preparation and good scouting. It puts some of it on our players,” Morgan said. “It’ll have to be good in-game adjustments and stuff that gets tweaked a little bit. We like to have our guys prepared, and when you can’t do it you have to coach them up and trust them a little bit more.”

Although this situation is unique, it won’t be the last time Warren Central faces an unfamiliar opponent this season. It has only played new Region 3-5A opponents Oak Grove, Terry and Petal once each in the school’s 56-year history. It has not played Meridian since 2006, and Forest Hill since 2004.

With an unfamiliar opponent, and no data points to study, Morgan said the focus shifts more to his own team being ready for anything that might pop up, just by playing sound, fundamental football.

“We want to be the best we can be — play winning football, take care of the football, stopping the run and running the ball and being good in the kicking game — those little things that we’ve won around here a lot on, we want to be really good at what we do and the rest will take care of itself,” Morgan said.

The Vikings passed a preliminary test last week when they beat North Pike 20-14 in a scrimmage. The teams played two quarters with the varsity and two with the junior varsity.

Darius Carter and T.J. Thompson both ran for touchdowns, and backup quarterback Jack Wright threw a TD pass to tight end Brandon January. Zack Evans had a long interception return to set up a touchdown as well.

Morgan said there were some first-game jitters — the Vikings have new starters at most of the line and secondary positions on defense, as well as a first-time starting quarterback with Hartley Sullivan — but he was mostly pleased with the performance.

“A lot of big eyes out there, with different starters,” Morgan said. “We have to have more productivity at the quarterback position for us to be successful. We need more and more reps at defense, and experience. We were our own worst enemy the other night with missed tackles. It was a very good learning experience we’re going to use to get better.”

On the positive side, Morgan was very happy with the running game on offense. Thompson and Trey Hall combined for 670 yards and seven touchdowns in 2020, and both are back in the lineup. Carter only had nine carries as a sophomore, but the 5-foot-11, 220-pounder will have a much bigger role this season.

“We feel like we have three really good backs, and we expect our offensive line to be the best in the state. I feel like we need to push them toward that and we can have that sort of a team,” Morgan said.

Morgan also expects the rest of the team to do well. Warren Central has the third-longest active streak of playoff appearances in Class 6A, behind only South Panola (19 years) and Petal (13), and Friday’s game is the first step toward pushing it into double figures.

“It marks the beginning of the year and our kids are awfully excited about it,” he said. “I don’t see any reason why it won’t be another good opening to a successful football season.”