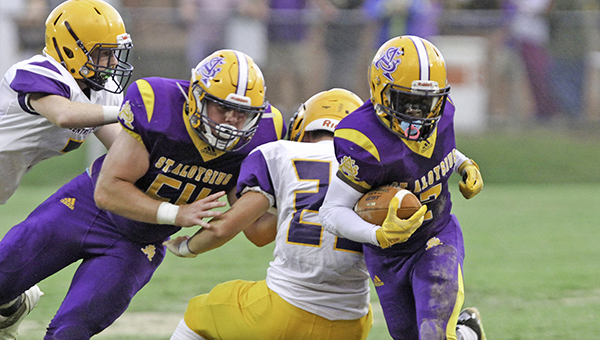 St. Aloysius racked up more than 200 rushing yards Friday. The only problem was Centreville Academy had about 300, and a few more points on top of it.

Ben McGregor ran for 129 yards and two touchdowns, and Centreville rode a second-half surge to a 42-27 victory over St. Al.

Centreville scored in the final seconds of the first half, and then outscored St. Al 22-6 in the last two quarters. It also scored two late touchdowns to ice the game after the Flashes cut it to one point in the fourth quarter.

“We played great. We still have a little issue with offensive penalties and some stuff to clean up,” St. Al coach Bubba Nettles said. “It teaches us how to be competitive late in ballgames. Being up 40 or down 40 doesn’t help you. At least it teaches you to fight to the whistle.”

Tristan Wilbanks and Padre Gray scored two touchdowns apiece for St. Al (0-2), which led 21-14 late in the first half. Centreville hit two long passes to set up a short TD run, however, and then McGregor scored on an 8-yard run in the third quarter to give the Tigers a 28-21 lead.

“The first half (McGregor) was fighting for every yard he could get. Then we gave them a short field and they scored a touchdown that shouldn’t have happened,” Nettles said.

Wilbanks’ 13-yard touchdown run cut it to 28-27 in the fourth quarter, but a bobbled snap on the PAT kept it a one-point game. Centreville then took advantage of a short field on the ensuing kickoff to drive for another McGregor touchdown, and the two-point conversion pushed it to 36-27.

The Tigers’ final scored came after St. Al couldn’t convert on fourth-and-12 deep in its territory with about two minutes to go. It led to yet another short TD run.

“That took away a lot of momentum,” Nettles said of the botched PAT.

St. Al will go on the road next week to play two-time defending MAIS Class 4A champion Riverfield. It’s the District 3-4A opener for St. Al, as well as the start of a three-week stretch in which it plays two state finalists from last season — Riverfield and ACCS.

“On our scale, I understand what SEC coaches go through on a weekly basis,” Nettles said with a laugh. “It feels like every week from this point forward it’s a powerhouse. They are certainly going to rise to the challenge.”