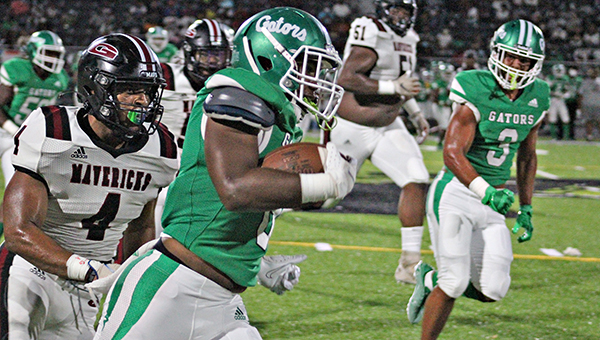 A string of big plays and quick drives cost Vicksburg High big-time in its Red Carpet Bowl battle with Germantown.

Germantown scored four touchdowns of 50 yards or more, and had three two-play scoring drives as it defeated Vicksburg 34-14 on Friday.

Several times the Gators failed to score when in the red zone, while the Mavericks repeatedly scored on short drives.

Sam Arnett’s 53-yard TD reception from Jackson Hood came on the second play of the game, after Korzabian Hill was penalized for a personal foul on the first play.

With just over 4 minutes to go in the first quarter the Mavericks had another two-play scoring drive. Branson Robinson, a senior 4-star recruit who has committed to Georgia, ran 64 yards for a touchdown. The Gators left the first quarter trailing 14-0 and plagued by penalties, but responded to the pressure.

Malik Montgomery ran it in from the 7-yard line for their first points of the game and Ronnie Alexander to Tyler Henderson for the two-point conversion, moving the score up to 14-8.

Vicksburg also scored on the first drive of the second half. Kearris Gilliam caught a pass in the end zone from Alexander to tie the score, but a second attempt at a two-point conversion failed and left it tied at 14.

The Gators got the ball back when Demarion Robinson recovered a fumble, but they couldn’t score in the red zone. Germantown answered with another big play, an 86-yard touchdown by Tony Knight Jr. on a screen pass, to go back in front 20-14. The PAT was no good.

The Mavericks scored again on a two-play drive — their third of the game — early in the fourth quarter. Cooper Ward scored on a 25-yard reception from Hood to make it 27-14.

Both teams failed to raise the score until less than three minutes to go in the game. Germantown’s Nelson intercepted Alexander’s pass and ran 81 yards for a clinching touchdown and a 34-14 lead.

McDaniel said he was proud of how his team fought against one of the country’s top running back recruits in Robinson, but the big plays were too much to overcome. The Gators will host Warren Central next week in their annual rivalry game.