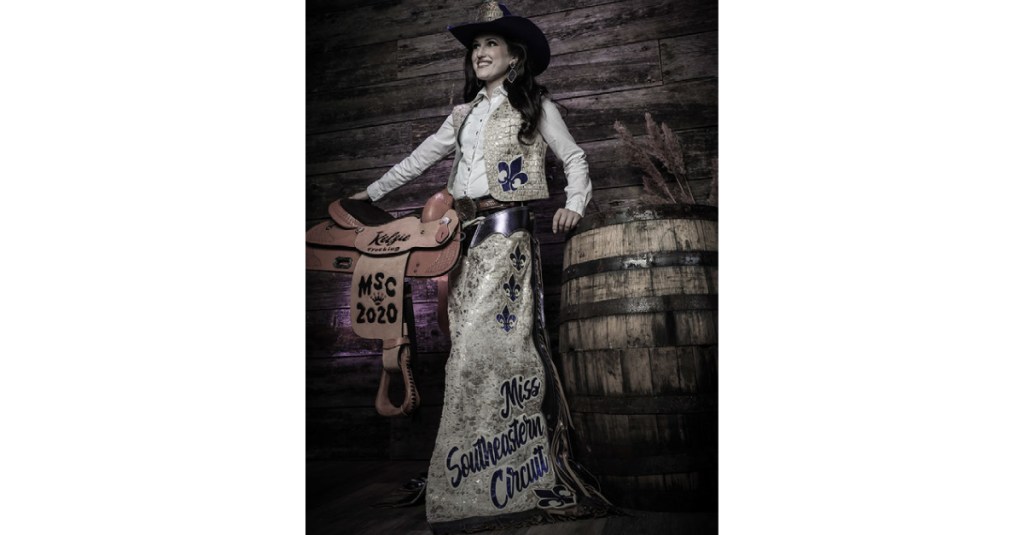 Syndey Albritton is the reigning Miss Southeastern Circuit and will be competing for the title of Miss Rodeo Louisiana in early September. (Photo by Sherry Smith Photography)

A former Vicksburg resident is the reigning Miss Southeastern Circuit and will go for a new Rodeo Queen title soon in a few weeks.

Sydney Albritton, 25, spent a large portion of her life growing up in Vicksburg. During that time, around the age of 7, she discovered her love for horses. She began riding English competing as a Hunter Jumper. But after a horse camping trip in the Appalachian Mountains as an early teenager, she discovered her passion for a different sector of the horse community.

“That’s where I learned how to barrel race and I was like ‘Oh no, I’m done with the jumps,'” Albritton said. “I want to go fast. That’s what I want.”

Upon returning home, she told her mother she now wanted to pursue Western riding and ditch her years of training in English riding, and she did it. She spent years training and competing in barrel racing following her camping trip.

“Ever since then I’ve been crazy about it,” Albritton said.

However, barrel racing still wasn’t providing her with all she wanted out of the Western riding way of life. Albritton loved the rodeo. She loved the lights, the show and the action. Barrel racing was missing this piece for her, as most often the competitions were set apart from the rodeo and didn’t include other events.

“I just really loved the atmosphere of the rodeo,” Albritton said. “I loved barrel racing but I needed to know what I can do to get back in the rodeo scene.”

She began exploring other avenues that would put her at the center of the rodeo scene. She joined a group called Wild Side Rodeo Chicks that put on a huge production at rodeos full of all the fireworks, smoke and lights that she was looking for. The team would perform drill routines.

“We would black out the arena and it was a very big production,” Albritton said. “I just loved that part of it — being a part of the show.”

Around 2015, as they got older, the group disbanded as some members began getting married and having children. Albritton was again left asking herself, “What’s next?” Her answer was not far behind the thought. At one of the next rodeos she attended, she watched the Rodeo Queens and thought to herself that she could do that and it would be her next move.

“Ever since then, that’s been my main focus and my main drive,” Albritton said.

Rodeo Queens are selected through a competition based on personality, appearance and horsemanship. Albritton first won a local title. The night she was going to give up that crown, she did a radio interview and when asked that reoccurring question of what’s next, she blurted out: “I’m going to run for Miss Southeastern Circuit.”

Albritton shocked herself with the statement as she hadn’t given much thought to the next competition. This new title’s qualifications require that the woman is within the ages of 19-26, unmarried and without children, and is a resident of one of the nine states that’s within the Southeastern Circuit: Louisiana, Mississippi, Arkansas, Tennessee, Georgia, Alabama, North Carolina, South Carolina and Florida.

“I guess God put it on my heart,” Albritton said. “After I said it, I was like ‘Oh boy, what did I just do? I just said it on the radio and now I really have to go do it. People are going to hold me to it.'”

Albritton won Miss Southeastern Circuit in November of 2019. She said she was thrilled to win the title and all the plans for the next year that came with the win. However, then COVID-19 made its appearance and most of the events that Albritton has planned for the year were unable to happen.

“It was only supposed to be a year, however, we had the COVID pandemic and a lot of the Rodeo Queens extended their title for another year because we basically couldn’t do anything for a long time,” Albritton said. “I chose to do that as well because I felt like I didn’t get hardly any of the experience that I wanted prior to what I’m planning for now.”

Albritton, now living in Monroe, La. where she was born, is planning to compete for the title of Miss Rodeo Louisiana on Sept. 11 and 12. If she wins the state title, she will be eligible to go on and compete in next year’s nationals.

“Miss Rodeo Louisiana is considered the pinnacle,” Albritton said. “I’ve decided to move on to the next level after I’ll be giving [Miss Southeastern Circuit] up in November of this year when we crown a new Miss Southeastern.”

One of Albritton’s friends is currently the reigning Miss Rodeo Mississippi and will be competing in nationals this year. 25-year-old Mary Claire Cornett of Purvis was crowned the champion of Mississippi in her very first Rodeo Queen competition. Cornett has been riding horses since she was 3 years old, grew up in a family immersed in rodeo and has always been interested in agriculture, but Jan. 23, 2021, was the first time she competed for a Rodeo Queen title.

“I didn’t really have any significant interest in becoming a Rodeo Queen until COVID-19 hit, and I realized that if I could do anything to be more involved in agriculture then I wanted a chance at it,” Cornett said. “I remember praying to God to give me an opportunity and, long story short, Rodeo Queen was the thing that kept showing up.”

Cornett said she is incredibly grateful and thrilled to be a part of the Rodeo Queen experience. She said she feels a responsibility to the people around her to be a great representative of the title she is holding. During her year-long reign, she will attend all Professional Rodeo Cowboy Association (PRCA) events statewide and abroad representing Mississippi.

“It is exciting but also a humbling aspect too,” Cornett said.

Cornett and Albritton met at the Grand National Circuit Final this past year. The two hit it off and instantly began having great times together. The pair won’t have the opportunity to compete against one another for the national title. However, if Cornett wins Miss Rodeo America 2022 and Albritton makes 2023 nationals, Albritton could have the potential to be crowned by her reigning friend.

For now, Albritton’s focus is on winning the Louisiana title before she can even think about winning nationals. After the Miss Rodeo Louisiana competition, Albritton plans to spend her remaining months of reigning Miss Southeastern Circuit fitting in as many appearances at rodeos and events as possible.

“I really want to try to focus on the time I have left and really push hard to make as many appearances that I can,” Albritton said. “I feel like I’ve gotten so used to this title because I’ve had it for two years now. I’m going to be very upset when I have to give it up. It’s going to be very bittersweet.”