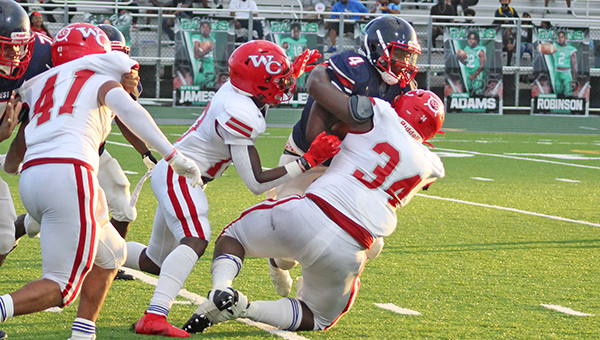 After he missed the last two months of the 2020 season with a broken ankle, Jaevian Mims said he entered 2021 with something to prove.

He certainly made a believer out of Forest Hill.

Mims intercepted three passes and returned one for a touchdown to lead Warren Central to a 27-0 win over Forest Hill in the 59th annual Red Carpet Bowl on Friday.

“It felt real great. I had missed last season and I just had a point to prove tonight. I just saw ball and got ball,” said Mims, a senior defensive back.

Warren Central won its season-opener for the fifth consecutive time, with another stout defensive effort. It posted its third straight shutout in the Red Carpet Bowl, and has only allowed one touchdown in six games during the winning streak. Oxford scored on the final play of the 2018 RCB that was halted in the third quarter by thunderstorms and declared a no contest.

“In this day and age you’ve got to relish every opportunity, take it week by week and one at a time, and take nothing for granted,” Warren Central coach Josh Morgan said. “Our guys got a chance to play in front of a nice crowd, on a nice evening, play well and win and hold a trophy up. So it was a good night.”

In addition to Mims’ interceptions, Roy Qualls had two sacks and Layton Burke had one. Forest Hill only had 82 yards of total offense.

“We had really good pass pressure. We didn’t have to blitz a lot. We got good pressure with our front four. I’m very proud of that bunch, and we needed that effort tonight,” Morgan said.

Warren Central’s first touchdown of the season came on its opening possession. T.J. Thompson ripped off a 36-yard run on the first play of the game, and three plays later Trey Hall scored on a 27-yard run.

Mims got the next touchdown, when he picked off a floater from Forest Hill QB Delvin Lacy and went 45 yards up the sideline and to the end zone a minute into the second quarter.

After a three-and-out and a short punt by Forest Hill gave Warren Central a short field, Darius Carter scored on a 4-yard run with 8:16 left in the second quarter.

Carter’s touchdown made it 20-0 and essentially iced the game with the way the defense was playing.

“We weren’t looking good Monday and Tuesday. We went to work Wednesday and Thursday and came back with the dub,” Mims said.

Warren Central did not score again until Hall turned a short pass from Jack Wright into a 56-yard touchdown with 8:11 left in the fourth quarter.

Hall finished with 120 total yards — 64 rushing and 56 receiving — and two touchdowns, and Thompson had 83 rushing yards. The Vikings, though, only had 210 yards of offense.

Morgan said there was a good reason for the low total — three starters on the offensive line had to sit out the game because of COVID-19 protocols, which forced him to play several new starters and move tackle Dontavius Bell to center for the first time in his high school career.

“We played without three starters on the offensive line and we had an entirely new group than what we started last week. We were trying to weather that storm and had a growing pain process of getting that right,” Morgan said. “We knew that was going to be the challenge. We knew the defense had to play good. That’s a tough spot to be in. We had to move Donta Bell to center, and that’s a spot he’s never played before. I thought he did a good job.”