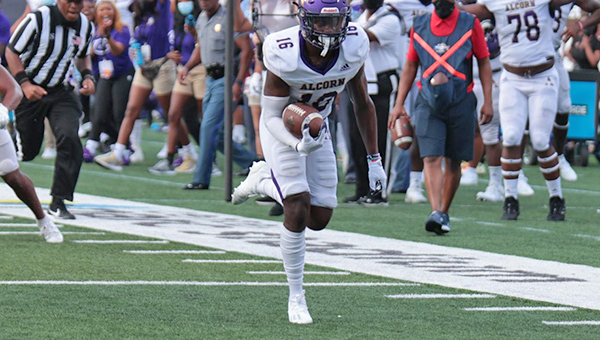 Alcorn State receiver Juan Anthony runs toward the end zone after catching a pass in the first half against North Carolina Central on Saturday. (Alcorn State Athletics)

ATLANTA — It had been 616 days since Alcorn State played a football game.

The return was not triumphant.

Brandon Codrington scored on a 77-yard punt return in the fourth quarter, quarterback Davius Richard ran for two touchdowns, and North Carolina Central spoiled Alcorn’s return to football by defeating the Braves 23-14 Saturday in the SWAC/MEAC Challenge in Atlanta.

North Carolina Central, which was also playing its first game since 2019, earned its first win over Alcorn in six meetings. It was the first time they’d played each other since 1976.

The Eagles fell behind 7-0 after their first three drives ended in punts. But they found their footing, scoring on four of their next five possessions, including a pair of touchdown runs by Richard and Adrian Olivo’s field goal before Codrington’s punt return.

The one non-scoring possession during that run ended with a fumble that led to Alcorn State’s second touchdown.

Alcorn State’s Felix Harper threw two touchdown passes and Stadford Anderson rushed for 128 yards on 11 carries. Anderson had seven carries for 105 yards in the first half, thanks to a 68-yard burst in the first quarter.

Harper was 17-of-27 passing for 154 yards, with a 20-yard touchdown pass to Juan Anthony in the first quarter and a 4-yarder to Niko Duffey late in the third.

Alcorn had the ball three more times, but punted twice after advancing just across midfield and on the third got the ball at their own 8-yard line with only 18 seconds to work with.

Alcorn’s next game is Sept. 11, at home against Northwestern State.