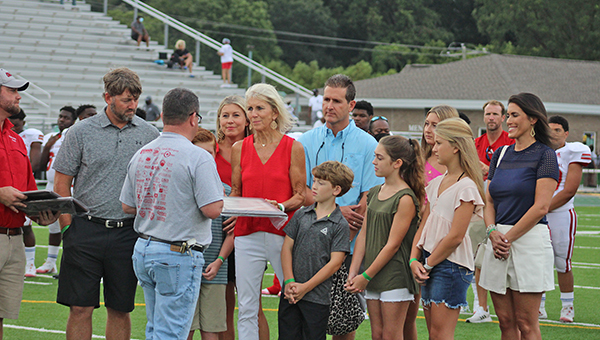 The family of the late George Carr is handed a plaque honoring him before the start of the Red Carpet Bowl on Friday. The game was dedicated to the memory of Carr, who died in March after a battle with COVID-19. (Ernest Bowker/The Vicksburg Post)

Time is short this week and there’s a lot of ground to cover. So it’s time to do a two-minute drill of football thoughts and notes as we head into the first full week of the high school season, Week Zero of the college season, and the final NFL preseason games:

• The high school season actually started two weeks ago with some MAIS games, and the state’s private schools played either their second or third games while the MHSAA played its openers on Friday. The term “Week Zero” has been coined to indicate the partial schedule the week before everyone kicks off, but how long will it be before we move to Week Minus-1?

• Alcorn State plays its first football game in 21 months when it takes on North Carolina Central Saturday night in Atlanta. The game will be televised on ESPN. It’ll be interesting to see how the Braves will be affected by the layoff, and whether they can maintain their dynasty in the SWAC.

Besides the long layoff, the league expanded to add Florida A&M and Bethune-Cookman this season, which shifted Alcorn from the East Division to the West. Alcorn will have Grambling and Southern University in its division and will have to go through both, as well as spring 2021 champion Arkansas-Pine Bluff, to reach the conference championship game. It’s a bit harder road than the Braves are used to.

• Despite some shipping issues, our annual “Playmakers” preview magazine was delivered this week. We still have copies available at our downtown office at 1106 Washington St. if you missed it.

It’s a big undertaking that requires a lot of people pulling together a lot of moving parts. Thank you to all of our coaches, players and support staff who helped us arrange photos, provided information, gave us a few minutes of interview time or just stood still for 10 seconds so we could snap a picture. We could never do it without you.

• St. Aloysius’ season opener started in a most unusual fashion on Aug. 20 against Park Place. The first three kickoffs of the game — two by Park Place and one by St. Al — were returned for touchdowns, and St. Al’s Adam Francisco nearly took the fourth one to the end zone.

Not surprisingly, every kickoff after that was intentionally sent out of bounds. Also not surprisingly, St. Al coach Bubba Nettles made kickoff coverage an emphasis at practice this week.

• The 59th annual Red Carpet Bowl on Friday night was dedicated to the memory of the late George Carr. Carr, who owned the Buick, Cadillac and GMC car dealership that carried his name, died in March following a battle with COVID-19. He was also heavily involved in a number of community projects and activities ranging from the Miss Mississippi Competition to the Vicksburg Kiwanis Club and youth sports.

The Red Carpet Bowl has had a tradition of dedicating the game to community leaders who have passed away, and recognizing them with a pregame ceremony. Others honored in recent years have included Bubba Mims, Rowdy Nosser, Wayne Roberts and Randy Wright Sr.

• A lot of inspirational quotes were put on white boards in locker rooms around the state this week. One of the best might be, simply, “Let’s have ourselves a season.”
So, to all of the teams out there, the season is what you make it. Make the most of it. Have yourselves a season.