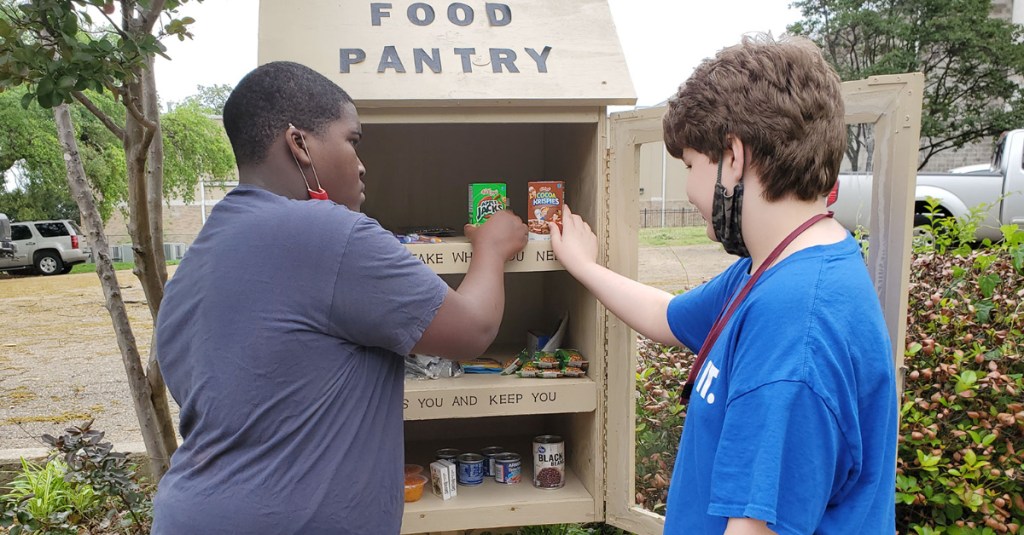 Chris Lockridge, left, and Stafford Truesdell, members of Micah’s Mission at Crawford Street United Methodist Church, replenish the stock at Crawford Street’s little pantry. Crawford Street and Mount Calvary Baptist Church built and stock little pantries to provide people in need quick access to food for a meal. Micah's Mission will be the beneficiary of money raised by what will be an annual horse show in October. (John Surratt / The Vicksburg Post)

Micah’s Mission, a faith-based educational mission at Crawford Street United Methodist Church, will soon be getting a financial blessing.

“We have been chosen as the charity for the Magnolia Classic Horse Show and Tennessee Walking and Racking Horse show,” said director Emily Williams.

“The Warren County Tennessee Walking Horse Charitable Corp. has chosen us as their charity of choice,” she said. “The show will be on Oct. 2 at the Kirk Fordice Equine Center in Jackson.”

The event, Williams said, coincides with the mission’s sponsor-a-student month.

“We have people who like to donate to help students out and sponsor them,” Williams said. “Some might pay a student’s tuition once a month some might pay the yearly tuition so they can continue to come to school here. Sometimes they choose certain students to sponsor and help, other times, their donations go in the hat and are dispersed among the students.

“Our full goal is for every student who comes to Micah’s to be fully funded.”

“Everything that is donated to the show and to Micah’s Mission through the Methodist Church goes to Micah’s Mission,” said Sarah Jane Parker, president of the Warren County Tennessee Walking Horse Charitable Corp.

Parker said the organization initially planned to do the fundraiser for Haven House, but officials with Haven House said they would be unable to participate because the event is in Jackson.

“They would be competing with other people (groups) in Jackson,” she said.

“It’s a fabulous charity and they’ve worked well with us,” she said, adding the Oct. 2 event is the first of what will be an annual fundraiser for Micah’s Mission. “Next year’s show will be a two-day show,” she said.

“I’m trying to make this not just a horse show, but an event,” Parker said.

She said everything, from the admission fees to money from concessions sales, goes to Micah’s Mission.

She said the Oct. 2 show’s 4 p.m. opening will be preceded by music from the band The Cypress Knees at 3 a.m. The show will begin with the National Anthem and a blessing of the arena. The Cypress Knees will also play for an afterparty following the show.

“We work with students in kindergarten through 12th grade,” she said. “Some have disabilities and some do not.

“During our school day, we work with a lot of home-schooled children so we help with the academics, we also work with pre-work skills; we have a curriculum, we teach independent living and we work on different social and communication skills.

“Our vision is capitalized in where we came from, our foundation Micah 6:8 in the Bible ‘to act justly, love mercifully and walk humbly with your God.’”

Attendance for students, she said, is according to the type of support a parent working with a homeschooled child might need, academically or socially.

“Some like their children to come for the social aspect instead of just being full-time at home,” Williams said.