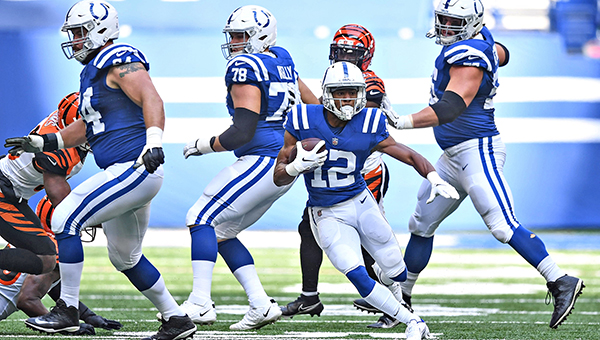 Indianapolis Colts wide receiver DeMichael Harris, a Vicksburg native, runs with the football against Cincinnati last season. Harris was one of 25 players waived or released by the Colts on Tuesday, the deadline for NFL teams to set their 53-man regular-season rosters. (Courtesy of the Indianapolis Colts)

Tuesday was cutdown day in the NFL, and a Vicksburg native was among the roster casualties.

Former St. Aloysius and Hinds Community College star DeMichael Harris was waived by the Indianapolis Colts, one of 25 players the team let go to pare its roster to the 53-man league limit ahead of Week 1.

The wide receiver is entering his second NFL season, and was waived instead of released because he has four years or less in the league. That means another team can put in a claim on him until 11 a.m. Wednesday and sign him to its 53-man roster. If a waived player is not claimed by another team, he becomes a free agent or can return to his original team via the practice squad.

Players can begin signing practice squad contracts at noon Wednesday. The practice squad is a team’s reserve unit — players work out with the team during the week, but do not dress out for games on Sunday. Practice squad players can, however, be activated for games if needed, and can be signed by other teams.

The practice squad was how Harris made the Colts’ roster in 2020. He originally signed with the Colts as an undrafted free agent out of Southern Miss, was waived at the end of training camp, and then signed to the team’s practice squad the next day.

Harris wound up being promoted from the practice squad three times during the regular season, which under NFL rules meant he had to be signed to the main roster.

Harris made his debut in Week 6 against Cincinnati and played in seven games. He caught 10 passes for 79 yards, and also had six rushing attempts for 46 yards while playing a total of 83 offensive snaps. He gained 10 yards or more on six of his 16 touches.

In three preseason games in 2021, he caught two passes for nine yards and was only targeted four times. Several injuries among the Colts’ receiving corps — including a neck injury that could sideline veteran starter T.Y. Hilton for several weeks — offered hope Harris could make the main roster out of training camp, but he was not among the seven receivers the team kept for its opener Sept. 12 against Seattle. Now Harris will have to fight his way back from the practice squad again or latch on with another team.