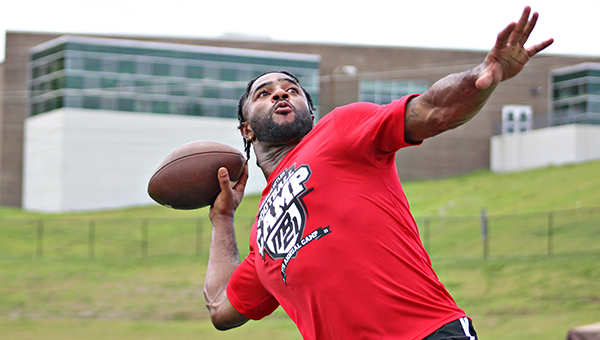 Vicksburg native Malcolm Butler throws a pass at his youth football came at Vicksburg High School in July. According to media reports, the two-time Super Bowl champion is considering retirement because of an unspecified personal issue. (Ernest Bowker/The Vicksburg Post)

The Arizona Cardinals put cornerback Malcolm Butler on the reserve/retired list Tuesday afternoon, after a report surfaced that said he was dealing with a personal situation and mulling retirement.

Butler, a Vicksburg native, was not at the Cardinals’ practice Monday or Tuesday, according to several news outlets. Butler has not made an official announcement, and Cardinals coach Kliff Kingsbury said he has not talked to Butler.

By putting Butler on the reserve/retired list, the Cardinals were able to save a roster spot as teams were required to get to the 53-man regular-season limit on Tuesday.

Butler can come off the reserve/retired list if he chooses to continue playing football, with the Cardinals required to make a subsequent move to clear a spot for him.

Kingsbury spoke to local media in Phoenix on Tuesday and was asked about Butler’s situation.

“I don’t want to get into, kind of, where it’s at,” Kingsbury said. “Like I said, nothing’s official. Just leave it at that.”

Butler was released in a salary cap move by the Tennessee Titans in early March, a few days after his 31st birthday, and signed with Arizona about two weeks later. He signed a guaranteed one-year, $3.25 million contract with the Cardinals and was headed into the season as their top cornerback.

NFL Media’s Mike Garafolo, citing multiple sources, broke the news Monday afternoon about Butler, saying the former two-time Super Bowl champion “is still trying to work his way through” his personal issue and that retiring or taking a sabbatical of some sort “is on the table.”

Butler, a former Vicksburg High star, made his mark by winning two Super Bowls with the New England Patriots and helping them reach a third. He originally signed with the Patriots as an undrafted free agent out of West Alabama in 2014. His last-minute interception to clinch a victory over Seattle in Super Bowl XLIX is considered one of the greatest plays in NFL history.

Butler has started 83 of 96 games since the start of the 2015 season, with most of the missed starts coming when he broke his arm midway through the 2019 season.

During an interview at his annual youth football camp at Vicksburg High in July, Butler said he was looking forward to playing a few more years in the NFL.

“I’ve got three or four in me, and then it’s on to the next journey,” Butler said. “But there’s no telling what’s going to happen. I’ll play the game as long as I can.”