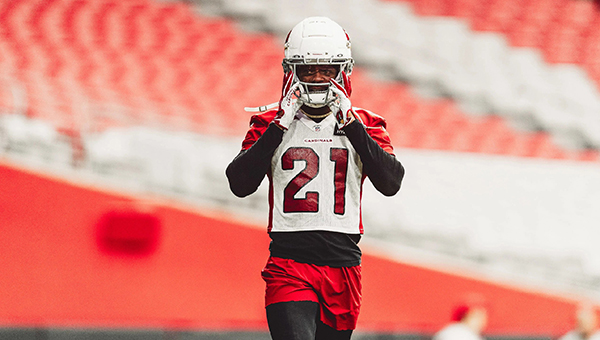 Arizona Cardinals cornerback Malcolm Butler adjusts his helmet during a preseason workout. The Vicksburg native has been absent from practice this week while dealing with a personal issue that reportedly has him contemplating retirement from the NFL. (Courtesy of the Arizona Cardinals)

Malcolm Butler still has not announced a decision about his football future, but it appears the Arizona Cardinals will hold a roster spot for him if he decides to play this season.

Butler did not practice with the team this week while he deals with an unspecified personal issue. Media reports have said the Vicksburg native is contemplating retirement.

Butler was placed on the Cardinals’ reserve/retired list Tuesday, when the team had to cut its roster to the 53-man regular-season limit. The designation means the Cardinals retain Butler’s contract rights without him taking up a spot on the active roster.

Butler has not made an official announcement about his retirement, and in speaking to the media Wednesday Cardinals coach Kliff Kingsbury said he was caught off guard by the situation that has developed in the past week.

“We all like Malcolm, like what he is about, he’s a really good player in this league, and it was a personal decision of his,” Kingsbury said in a story posted to the team’s website.

Kingsbury did not offer specifics about the issue that has kept Butler away from the team, but did say that putting him on the reserve/retired list was the best decision for the team at the moment.

“That’s a personal question that you’d have to ask him, but as an organization, and talking with his people, this is the spot we came to,” Kingsbury said.

Kingsbury said Tuesday that he had not talked to Butler during his absence, but on Wednesday said the line of communication between the player and team is “always going to be open.”

The Cardinals were set to take a four-day break after Wednesday’s practice, before beginning preparations for their season opener Sept. 12 at the Tennessee Titans.

Butler, a former Vicksburg High star, was set to enter his eighth season in the NFL. He won two Super Bowls with the New England Patriots, and spent the past three seasons with Tennessee. He had 100 tackles and four interceptions for the Titans in 2020, but was released in March in a cost-cutting move.

Butler signed a one-year, $3.25 million contract with the Cardinals a week after the Titans let him go. Pro Football Talk reported Wednesday that if he decides to retire he would lose a guaranteed salary of $1.075 million, along with up to $2.75 million in incentives.