Colts bring back Harris, sign him to practice squad 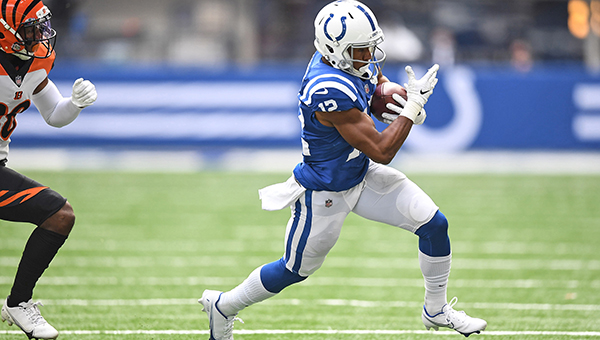 Indianapolis Colts wide receiver DeMichael Harris, a Vicksburg native, runs with the football after making a catch against Cincinnati last season. Harris was waived by the Colts on Tuesday, but signed to their practice squad on Wednesday. (Courtesy of the Indianapolis Colts)

DeMichael Harris’ time on the NFL unemployment line only lasted a day.

The Vicksburg native and former St. Aloysius star was among 15 players signed to the Indianapolis Colts’ practice squad on Wednesday, a day after he was waived by the team as it cut its roster to the 53-man regular-season limit.

It’s the second year in a row that the 23-year-old wide receiver was cut by the Colts at the end of training camp and then signed to their practice squad. He took that route after coming to the team as an undrafted free agent out of Southern Miss in 2020.

Harris will hope to make the most of the opportunity this season like he did last year. He was promoted from the practice squad to the active roster three times, which under NFL rules meant he had to be signed to the 53-man roster for the rest of the season.

Harris made his debut in Week 6 against Cincinnati and played in seven games. He caught 10 passes for 79 yards, and also had six rushing attempts for 46 yards. In three preseason games in 2021, he caught two passes for nine yards.

The practice squad serves as a team’s reserve unit, and is typically comprised of younger players with less than two years of experience in the NFL. They practice with the team during the week but are ineligible to play in games unless they are activated by their clubs.

If activated, a player reverts to the practice squad the day after that week’s game is played. However, if a player is activated three times, he must be signed to the 53-man roster for the rest of the season.

Practice squad players make a minimum of $9,200 per week, or $165,600 for 18 weeks, under the league’s collective bargaining agreement with the NFL Players Association.