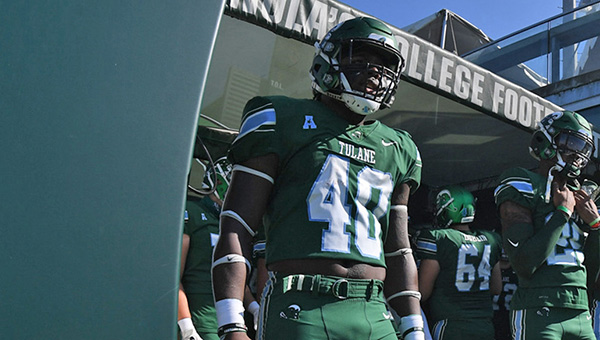 When it comes to football — or life — Nick Anderson’s philosophy is simple. He might win some plays and he might lose some, but there’s always something to learn from the experience.

After three seasons of college football, Anderson is indeed getting better and better. The Tulane linebacker was ranked among the best run stoppers in the country according to advanced metrics site Pro Football Focus, and finished second on the team in tackles.

Heading into 2021, the former Vicksburg High star is looking to take it to the next level and become not only a force for the Green Wave but in the entire American Athletic Conference as well.

Anderson has always aimed high. After a high school career in which he won The Vicksburg Post’s Defensive Player of the Year award twice, he passed up several Division I offers to play junior college football at Jones College.

Anderson bet on himself that he could produce enough to earn a spot at a Football Bowl Subdivision school, rather than the lower-tier Football Championship Subdivision programs that were recruiting him out of high school.

The gamble paid off when Tulane signed him after only one season at Jones. Anderson said his semester in Ellisville was valuable on a lot of levels.

“I wouldn’t trade my time at Jones for nothing. I feel like, as a player coming out of high school, going to Jones was a humbling experience for one. For two, it helped me adjust to how college life and college football is,” Anderson said. “I met some of my greatest friends there. I met a coach (Dwike Wilson) I can call any time. It gave me the opportunity to get seen by Tulane. If I could go back, I would have did it the same way all over again.”

Since arriving at Tulane, Anderson has made his presence felt. He has played in all 25 games over the past two seasons, and racked up a total of 114 tackles and 4.5 sacks. Most of those came in 2020, when he had 88 tackles, 3.5 sacks and 10.5 tackles for loss.

Anderson did not earn all-conference honors in 2020, but was No. 49 on Pro Football Focus’ list of the top 101 college football players in the country. The teams were selected by utilizing PFF’s grades and advanced statistics.

Besides playing well on the field, Anderson handles his business off of it. The Homeland Security Studies major was selected by Tulane as a Stephen Martin Scholar in 2020. The award recognizes student-athletes who represent the highest level of character and leadership skills while being academically driven and civic-minded.

For the 2020-21 school year, Anderson was named to the AAC’s All-Academic Team for maintaining at least a 3.00 GPA. He is Tulane’s nominee for the Campbell Trophy, considered the “academic Heisman.”
He also changed his jersey number from 40 to 1, given as a reward by coaches for being one of the team’s top defensive players.

Heading into the 2021 season, Anderson is hoping to keep getting better and help Tulane get over the hump to the AAC championship game. The Green Wave finished 6-6 last season, with three losses coming on the final play. Two of those were in overtime.

“Everything is going great. I think we’ve got a dynamic team this year,” Anderson said. “We’ve improved our coaching staff by hiring two new coordinators, and we also added a lot of depth to the team. We brought in a lot of freshmen that can help us out quickly. I think we can be very good this year.”

Anderson was also excited to prove himself against Tulane’s non-conference opponents. The season opener is Saturday against No. 2 Oklahoma, and the team visits Ole Miss on Sept. 18.

“I look at it as an opportunity for me to showcase my talents, for my teammates to showcase their talents, and for us to show that Tulane football is one of those top-tier teams. To be able to play that kind of competition, I’m excited for it. It’s a situation you live for,’ Anderson said of playing Oklahoma. “If that doesn’t make you excited to play, you don’t have that excitement gene.”

The game was originally scheduled to be played in Tulane’s Yulman Stadium, but was moved to Norman, Okla., after Hurricane Ida ravaged New Orleans.

Tulane will be the designated home team and will retain all net proceeds from ticket sales. The schools said they will work together on finding a date in a future season for a game in New Orleans. Tulane was scheduled to play the second half of the home-and-home series in Norman in 2024.

Oklahoma athletic director Joe Castiglione said due to the short notice and it being a holiday weekend, several game services providers will be unable to assemble a full staff for this game. Only the lower bowl of the stadium will be used for fan seating.

“I wish that we could accommodate a full stadium for this game, but these are challenging circumstances with very little notice,” Castiglione said. “We have thoroughly assessed the many aspects of hosting a game and there is no question that this is the right course of action.”