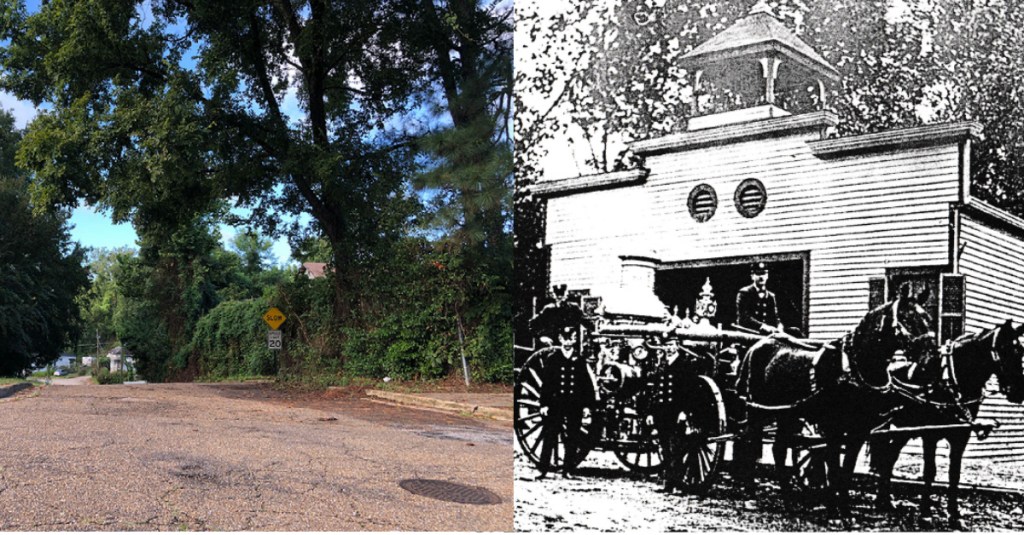 Speed Street Fire House No. 5 was constructed in 1902. Today, the site is paved over. (Photos submitted)

This reel house and hose wagon station was built in 1902 by L. Ledbetter, who also built the Hook and Ladder Station No. 6, in the middle of Hunt Street on the south side of Speed Street.

Ellis Adams was given charge of the station, remaining there until it closed about 1916 and he was moved to No. 7. The saddest event to occur in the history of this firehouse happened on Dec. 30, 1902, when the firemen were returning to the station after battling a fire at the Western Telegraph office.

The Vicksburg Herald reported that “the chief and his men were returning to the station after the fire had been subdued and were passing near the corner of Washington and Veto streets when the off horse, ‘Dave,’ ran against a dangling wire which had become crossed with a trolley wire, the shock being so great as to throw the animal to the ground, the heavily charged wire becoming entangled about his neck, causing a horrible death.

“The firemen, seeing the danger to the other horse of the team endeavored to get a message to headquarters to cut off the current, but before this could be done, the current had been communicated to ‘Bill,’ the teammate of the dead and before he could be released from the contact life was extinct. They were a fine pair of animals and made excellent time getting in to the fire, the first-mentioned being among those purchased recently for the city by Mr. Frank Barber, and the city stands to lose some $500 by reason of their tragic end.”

After the building was demolished, the ground was graded and the street was paved, as it is today in this photo.